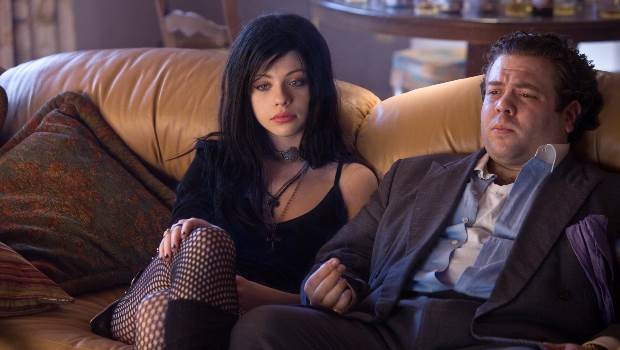 Summary: A gimmicky comedy that wants to appeal to the same demographic as The Wedding Singer with its similar 80s theme.

Reliving the 1980s via a high school comedy has a certain appeal to a narrow age range, and that’s exactly who Take Me Home Tonight is aimed squarely at pleasing. The style of the era is combined with the music as no-hoper video shop assistant Matt Franklin (Grace) tries to act the successful yuppie businessman at a reunion of the class of ’84 in 1988 to win over his secret classroom crush Tori (Palmer). Matt’s best buddy Barry (Fogler), armed with a bag of cocaine he found in a car glovebox, and younger sister Wendy (Faris) join his quest for love filled with jocks, hot girls, pranks and gross out comedy, and while the 80s are very much placed at the centre of Take Me Home Tonight, there’s too much of a seen-it-before feel to spark any huge pangs of nostalgia.

There’s more than enough hits from the 1980s to give it a classic soundtrack as “Hungry Like the Wolf”, “What You Need”, “Come On Eileen” and “Warm Leatherette” play over key scenes while the naff style of shell suits, big hair and dance offs ensure the look of the era are not forgotten. There’s plenty of potential to mine more popular 1980s culture when we first meet Matt in the video store surround by classics of the time, however Take Me Home Tonight quickly dismisses any suggestion that this will be a period piece for those who were young at the time and opts for the well-trodden plot development of guy assuming a fake identity to try to win the girl of his dreams: Matt acts the yuppie banker at Goldman Sachs to get an invite from Tori to his sister’s boyfriend’s Labor Day party which will be his chance to score. And so we follow Matt as he recruits Barry, his car salesman best friend, to help him wow the opposite sex, though things don’t go quite to plan.

Armed with a bag of coke and a room full of drunk women ready to launch themselves at the nearest banker, Matt finds it tough going to prove to Tori he’s different from the rest while Barry embarks on a drug-fuelled journey into debauchery. There’s not much here that hasn’t been seen before in the American Pie series or numerous other high school comedies – and Take Me Home Tonight doesn’t make the most of the 1980s theme to set itself apart beyond the music and some nasty dress sense which is a shame as the opening 15 minutes give the impression this will be a light-hearted trip back in time. Instead it’s a gimmicky comedy that wants to appeal to the same demographic as The Wedding Singer with its similar 80s theme, but doesn’t have the same cutting edge or stand-out performers like the 1998 hit.