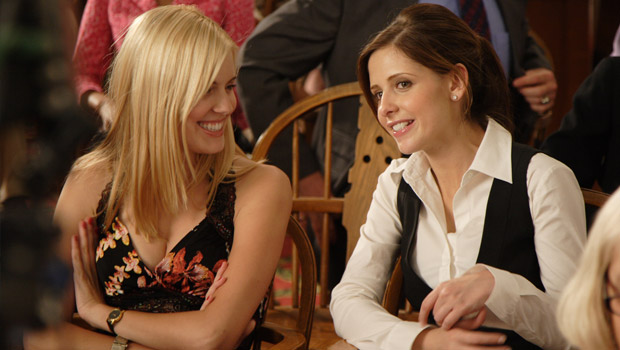 Summary: Great for a girlie night in - don't bother inviting any guys along though.

If the thought of Sarah Michelle Gellar looking at Alec Baldwin and saying “he’s cute” sends you reeling in disbelief, Suburban Girl is not the film for you. Clearly aimed at the same chick flick market as The Devil Wears Prada, Sex and the City: The Movie and Bridget Jones’s Diary, the story of a wannabe Manhattan book editor takes the notion that young career women are attracted to chubby, older men in the same powerful positions they see themselves in later in life and runs with it. Buying into this theory in the adaptation of the best-selling book The Girls Guide To Hunting and Fishing is another matter altogether.

OK, so you’ve probably guessed chick flicks like this are not my favourite genre and Suburban Girl has a plot I find almost impossible not to roll my eyes at – a clueless female lead character reliant on an older man to show her the ways of the world. Gellar is Brett Eisenberg, a shy yet ambitious young professional at the foot of her career ladder who wants to be seen as a streetwise city girl when really her suburban insecurities means her naivety prevents her moving up the halls of power. Then she meets the successful publishing guru Archie Knox (Baldwin), a social playboy who takes a shine to Brett. Acting as her mentor in the bedroom and as well as the office, he’s the man that can make Brett’s dreams come true – if his fractured relationship with his daughter and a string of ex-wives don’t turn it into a nightmare.

Brett’s instantaneous swooning for Archie and his sickly sweet treats of romantic dinners and expensive dresses are mixed up by a best friend (Maggie Grace) advising Brett to be careful and a droopy boyfriend (Chris Carmack) suddenly showing up on the scene after travelling in Europe. It’s a standard set-up to create a series of minor personal dilemmas for Brett who needs Archie’s career assistance and can’t say no to his vast wallet paying for their lavish relationship for which he is rewarded with demands for sex in moderately adventurous places. Eventually the age difference between the two of some 25 years starts causing emotional issues such as Archie using Brett as a replacement for the daughter he has grown distant to while Brett battles with being seen a little girl by all of Archie’s business associates. Predictable, yes, although their introduction does bring some much-needed depth to their otherwise one-dimensional characters.

“Cute” is not a word you could use to describe Gellar and Baldwin’s on-screen relationship, especially as they Blackberry each lover’s messages to each other on either side of the bedroom. Sickening is a more accurate description, especially given Gellar’s doe-eyed performance, so it’s hard to want their romance to succeed. Suburban Girl winds up being an easy-to-watch rewrite of many other chick flicks rather than a shining example of one done well. Great for a girlie night in – don’t bother inviting any guys along though.