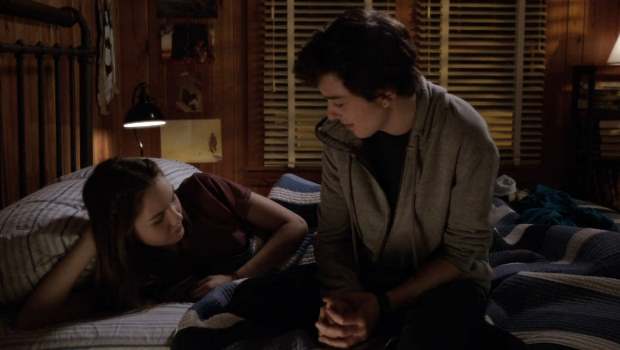 Brandi (Suvari, with a production credit to her name), is a white trash care home worker in an anonymous US city. Unusually dedicated to her dribbling, incontinent, senile charges, Brandi’s diligence is noted by her boss, who tells her that she is being considered for promotion to a supervisory role. Thrilled, Brandi can’t wait to share the news with drug dealer boyfriend Rashid (Hornsby) and best friend Tanya (Bernard), and the three get drunk and drop a few pills to celebrate.

Across town, Thomas Bardo (Rea) is having a bad day. Thrown out of his boarding house for non-payment of his rent, pushed around by the jobsworths at the employment bureau, he has been reduced to sleeping on a park bench. Moved on by the police, he decides to try the local shelter, and is pushing his cart over there when he is hit by Brandi, too busy chatting on her mobile to see him until its too late. Instead of stopping, Brandi bizarrely decides to drive home, though Thomas is actually halfway through her windscreen and clearly badly injured. When she gets home, she shuts him in the garage and leaves him there, too scared to say anything to Rashid, but happy to have sex with him.

In the morning, she is surprised to find him still alive and desperately trying to escape. Terrified that she will lose her promotion if the police find out, she makes one bad decision after another, her attempts to keep Thomas in the garage becoming ever more sadistic and extreme.

The fact that Stuck is based on a true story convinces me that humanity is doomed. When I’ve attempted to describe it to people they think I’m making it up.

It actually begins well. Stephen Rea’s bloodhound eyes convince us that he is a man on the edge, desperately striving to maintain a veneer of civilized behaviour even when it is clear that no-one around him gives a toss. The only person who shows him any kindness or fellow feeling in the whole film is another homeless man, Sam (Lionel Mark Smith). Otherwise he is surrounded by faceless bureaucrats of the ‘computer says no’ school of administration, police officers who refuse to turn a blind eye; even Brandi’s neighbours are frightened to investigate the noises coming from her garage as they are illegal immigrants. This is the ‘smart’ side of the film, taking some fairly broad swipes at the underbelly of the American Dream.

Unfortunately the whole thing falls apart in the rubbishy ‘thriller’ elements that pit Brandi against Thomas. Brandi is an entirely ridiculous character: a wigga (apparently the real Brandi was black) with an unfortunate cornrowed hairstyle that gives her a positively Elizabethan forehead, and a streak of gullibility a mile wide, she is entirely unsympathetic. She spends the whole film whining that the accident wasn’t her fault, and then, having smacked Thomas over the head with a piece of 2 by 4, persuades Rashid to kill him. Thankfully Rashid is as stupid as Brandi, while Thomas is surprisingly keen to live, despite seemingly having little to live for.