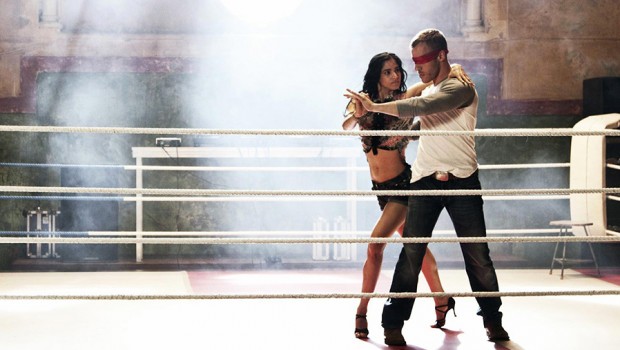 Summary: It lacks the charming naiveté of the first time round, but there’s a spontaneity about these films that makes them, if not hard to criticise, then at least hard to resist.

“Bigger, better, bolder, back.” The quote by the Sunday Mirror’s Mark Adams prominently emblazoned across the top of the poster for StreetDance 2 3D pretty much tells you all you need to know about the sequel to the surprise hit of 2010, the UK underdog that came from nowhere to gleefully bash such bloated bombs as Ridley Scott’s Robin Hood and Prince of Persia (remember them?) at the box office upon its original theatrical release. Even more revealing is the appearance of the logo for the new BFI Film Fund in the opening credits. This is one of the first titles to receive its lottery funding via the BFI following the abolition of the UK Film Council on 31 March last year and, on the surface at least, appears to be pretty much the type of film we all thought David Cameron was crying out for just a few months back – a glossier reprise of a low-budget, high-earning film with mass popular appeal and high export potential. Ken Loach, this ain’t, but it’s a whole lot of fun, nonetheless.

Less a sequel than a reboot, the new film clearly has its eye on a bigger market than the UK. Largely eschewing the self-congratulatory back-slapping one would expect from a British film of this nature set in the year of the Olympics (although the London 2012 logo does appear once, in an early dance number set in Trafalgar Square), StreetDance 2 is essentially a tale of two cities, with much of the action ostensibly set in a Paris consisting of smoky bars and underground dance venues, and shabby youth hostel dormitories. There’s only a few choice exteriors to give an indication that even the smallest part of it was actually filmed there, while the vast arena that plays host to the spectacular final tournament is a dazzling, otherworldly CGI creation.

Not that the British side of things gets very much of a look in, with Nicola Burley’s sassy ‘Sarf’ London cru replaced wholesale by a pan-European posse led by clean-cut American Ash, played by newcomer (and dead ringer for Will Young) Falk Hentschel. Ash’s early-scene humiliation, after challenging London locals Invincible (curiously affecting American accents) to an underground dance-off, sees him ending up flat on his arse and assigned with the sobriquet ‘Popcorn boy’, as well as instilling in him a taste for revenge, fostered through a chance meeting with chirpy chappy Eddie (2008 Britain’s Got Talent winner Sampson), who offers to manage him. From then on in, it’s a brief hop, skip and jump around the continent as the unlikely pair attempt to put together a team to rescue Ash’s crumpled pride by taking on the arrogant rude boys at the world’s biggest dance competition, Final Clash, to be held in the French capital in but a matter of weeks. Before long the hapless duo are joined by, among others, Tino from Ibiza, Skorpion from the Swiss Alps, a tattooed lass from Amsterdam named Bam-Bam and Terrabyte from Prague, winding up in Paris where they discover the final missing ingredient in the shapely form of sultry salsa-dancing Eva (Boutella), all black fishnets and booty-shaking action.

Eddie is the first to spot the pouty Parisienne’s potential to add a fiery touch of spice to the urban collective by introducing a more Latin groove to their routine. However, two obstacles stand between Ash’s will-to-power desire for revenge by way of such romantic fusion. The first, Eva’s current partner Lucien, is quickly eliminated, exiting the dance floor with a haughty Gallic shrug after being harangued because he has a girl’s name and his fandango is not quite ‘street’ enough. The second is her fiercely protective Uncle Manu (Conti), reprising his Mediterranean shtick from Shirley Valentine (1989). Oh yes, and there’s a third – the chisel-jawed American’s unwillingness to share his moment.

StreetDance 2 lacks the charming naiveté of the first time round, but there’s a spontaneity about these films that makes them, if not hard to criticise, then at least hard to resist. The 3D format almost seems tailor made for its subject, far more so than the sort of macho action spectacles one usually associates it with. Bodies leap and contort rhythmically, in several instances eliciting uniform gasps of amazement from the audience at the screening I attended, while misty swathes of perspiration, dust motes and cigarette smoke accentuate the sense of volumetric space. The path to epic Final Clash might be a familiar one, but it’s exhilarating nonetheless.

The portrayal of a new borderless and multi-ethnic Europe united in a harmonious body politic by a common street-level empathy is also rather fascinating. This is one aimed at the EasyJet rather than the Eurorail generation, with barely a beret in sight, and the gasping, garlic sausage-guzzling Uncle Manu left as the sole representative of the pre-single currency era. He’s not without a few wise words for the youngsters, too. “Dance with your heart, not with your head”, he advises our headstrong young hero or, translated into their street argot, “Don’t treat your bitch like a ho.” Manu’s role is to sandpaper down the competitive edge off the dancers, reminding them of the central role of passion in performance and exhorting them to temper their more aggressively sexy and confrontational stance with a bit of old-school romanticism – hence the running joke throughout the film of Eva consistently rebuffing Ash’s insistence they share the intimacy of dinner, despite spending hours of practice grinding their thighs together.

The film’s initially conservative-seeming message, of a WASP-ish white boy from the U.S. coming in to rally together the disparate elements of a fragmented Europe with the aid of his British sidekick and lead them unto victory, is turned on its head by the finale. In a film in which the line between text and subtext often seems to strain beneath its gossamer flimsiness, it’s possible to detect a slightly more radical idea, as the pushy outsider effectively learns to subjugate his ego for the good of the collective – in other words, to become more instinctive, and indeed, more European. Now I wonder what David Cameron would make of that?