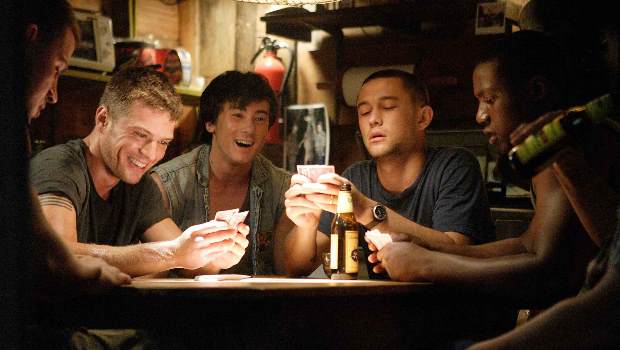 Summary: Like Fahrenheit 9:11, it broods on the injustice of the US military which treats powerless human beings like machines.

Stop-Loss, director Kimberley Peirce’s follow up to the Academy Award winning Boys Don’t Cry, hit cinemas earlier this year and promptly vanished, victim of the same audience indifference to Iraq War films that has blighted In The Valley Of Elah, Rendition, Lions For Lambs and any number of other films. It seems weird that people won’t watch these films, and in Stop-Loss’ case a shame, as it is much less about Iraq than it is, like Boys Don’t Cry, about the nature of masculinity.

Staff Sergeant Brandon King (Phillipe), a good old Texas boy, is on his way home from an heroic but horrific tour of duty in Iraq. He and best friend Sergeant Steve Shriver (Tatum) are looking forward to returning to civilian life; though the welcome home parades and parties are fun, he knows he needs to move on, still haunted by the memories of the people he killed and the men who were injured under his command. Not all of the boys are done with the army though – Tommy (Gordon-Levitt) needs to keep his nose clean, but is a little too fond of booze, and the celebrations are marred by violence and the scars left from their time in Iraq.

Brandon goes back to base to turn in his uniform, and is greeted by the news that he is going back to Iraq. Lt. Col. Boot Miller (Timothy Olyphant), an old friend, is sorry to tell him, but he is a victim of the stop-loss policy, where the army can basically send soldiers back to the field of combat against their wishes. Brandon is outraged, but Miller gives him a direct order; when he disobeys it, orders the military police to put him in the stockade. Brandon manages to escape, and goes AWOL with the help of Michelle (Cornish), Steve’s girlfriend. He decides to head north to Washington, and try and enlist the help of local Senator Orton Worrell (Josef Sommer), who had promised Brandon any assistance he might need.

Michelle and Brandon’s road trip is eventful. He meets other soldiers on the run, and begins to realise that this might be his life. There is a sort of underground railroad, much like that for runaway slaves from the ante-bellum South, and when Brandon realizes that he will get no help from Worrell he heads to New York, where a liberal lawyer advises him that his only option is a new identity and a new life over the border in Canada. But then the news comes that Tommy has killed himself, and Brandon has to make a painful choice…

My first thought on watching Stop Loss is how young the soldiers look. Peirce makes good use of grainy handheld footage to show the boys laughing and bonding in Iraq, suggesting that one of them is filming on their mobile, but then cuts abruptly to brutal scenes of combat where these extremely young men are forced to make frankly horrible decisions. It’s clear that Brandon is a good soldier, professional and smart. It’s also clear that he has a conscience, and that he increasingly struggles to reconcile his actions with his morals. But in the end, he volunteered, he served, and now he should be released, otherwise this is just a sneaky form of the draft, and totally unfair.

It’s a shame that the political thrust of the film gets in the way of the story, as once Michelle and Brandon head off on their road trip we lose sight of some of the other characters. And a pity that Peirce resorts to the usual manly punch up to resolve issues in the end. But that is not to say that Stop-Loss doesn’t have interesting things to say; it does. Like Fahrenheit 9:11, it broods on the injustice of the US military which treats powerless human beings like machines.