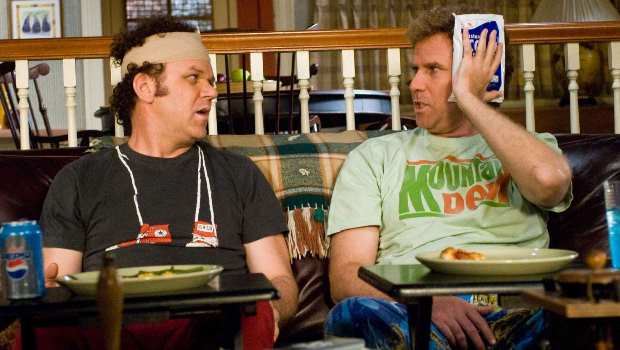 Summary: What Step Brothers lacks is any one moment that sets it apart from numerous slacker comedies.

Will Ferrell fans must be getting tired of watching their hero on the big screen. With every movie he stars in, his routine of shouting loudly, fighting haphazardly or acting childish become less endearingly funny and more brashly annoying. So it is with Step Brothers in which he takes a leading role alongside John C. Reilly as two 40-year-olds still living at home with their single parents. Forced to move in with each other when their respective elders marry, the step brothers hate each other initially, then become best friends and make their parents hate them so much they are threatened with having their spoiled lives ruined. Seeing a couple of grown men abuse each other and act like children might have been fun for Ferrell and Reilly, but watching them cavort around soon becomes as tiring as looking after a whole class of 11-year-olds at the zoo.

Brought to us by writer/director Adam McKay (Anchorman, Talladega Nights) and producer Judd Apatow (Superbad), Step Brothers gives the impression they are struggling for new ideas. Essentially, this is a one-joke film in which Brennan Huff (Ferrell) and Dale Doback (Reilly) act like teenagers for almost the duration of the film, before coming to a hurried and unsatisfying conclusion. As enemies Brennan and Dale are rude to each other across the dinner table and find ways to annoy each other such. Brennan tea-bagging Dale’s drum kit is straight from the lowest gross-out school of comedy while their bickering becomes repetitive. When they unwittingly become best friends, putting up bunk beds and planning “activities” raises a few laughs from their boyish bonding – Reilly and Ferrell really do seem at home in the mindsets of 12 to 16-year-olds – but it goes steadily downhill as the film loses direction in search for an ending.

Looking on at Ferrell and Reilly’s performance are Richard Jenkins as Dale’s father Robert and Oscar-winner Mary Steenburgen as Brennan’s mother Nancy who get to stamp authority on their children and play the parts of frustrated parents perfectly between lovingly supportive yet at a loss of how to help them: anyone with teenage children will feel their pain. Brennan’s hot shot brother Derek (Adam Scott) and his Dale-obsessed wife Alice (Kathryn Hahn) do bring some variation in the comedy, but more as a mild diversion than anything else.

What Step Brothers lacks is any one moment that sets it apart from numerous slacker comedies. The idea of Brennan and Dale still living with their parents at 40 stalls after 45 minutes when it becomes clear that the jokes will all involve men acting as children by shouting, fighting or playing together while Robert and Nancy look on in horror. There’s little more to it and with Brennan and Dale coming across as idiots rather than loveable rogues, enjoyment levels flatline towards the end. Ferrell probably should give Anchorman 2 serious consideration if he wants to hold on to the fans he still has.