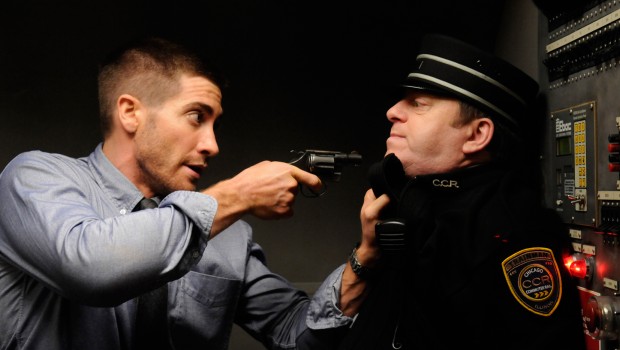 Summary: Source Code is a very solid thriller, both entertaining and thought provoking.

Until Moon, Duncan Jones was better known as Zowie Bowie. Then he was a promising debut director, but many a promising debut is followed by a dud, especially when Hollywood comes calling – Moon was an independent, low-budget, old fashioned sf film which, shockingly, did not rely on CG, but used miniatures, matte paintings and other old school techniques to create a tangible lunar landscape. Source Code has a much bigger budget and a bona fide leading man in Jake Gyllenhaal, but thankfully Jones’ sophomore effort is no less intelligent than his debut, sf being a genre that allows filmakers to explore big ideas; Zowie can now be forgotten.

The big idea of Source Code is that when a person dies, the last eight minutes of their life is somehow preserved in their memory. The military have been running an experimental programme which allows them to take a subject and insert them into a dead person’s memory; their first subject is dashing pilot Colter Stevens, who wakes up on a train to find himself in the body of an unknown man. The pretty girl opposite him (Monaghan) is chatting away, and none of the other passengers have noticed anything strange. And then the train explodes… and Stevens is in what appears to be the cockpit of his helicopter, with a woman called Goodwin (Famiga) on the screen, explaining that he needs to find the bomber before sending him back to the train to live those eight minutes again, and again, and again.

Though I didn’t think Inception was as clever as it thought it was, I hope that the success of films like Inception and Source Code will persuade the studios to make more films that demand something of audiences as well as big summer popcorn flicks. What’s great about Source Code is the way that, as Stevens repeats the past, he comes to anticipate events, and every time he goes back its slightly different, subtly altered. I can image that continuity must have had a nightmare. The film provokes questions too, the biggest one being, are these memories a read only file, or can Stevens actually change the future?

Jones has a lot more budget to play with, but seems to have largely managed to resist the lure of CGI. It has a very fresh and bright feeling, with no real sense of period. Jake Gyllenhaal is convincing as the confused, suspicious and then committed Stevens; supporting him, Michelle Monaghan is charm itself, making you believe that he could fall in love with her in eight minutes. Vera Farmiga, so good in Up In The Air, is here cool on the outside as handler Goodwin, her strings being pulled by Wright’s dubious Dr Rutledge. Source Code is a very solid thriller, both entertaining and thought provoking. I look forward to Jones’ next film.