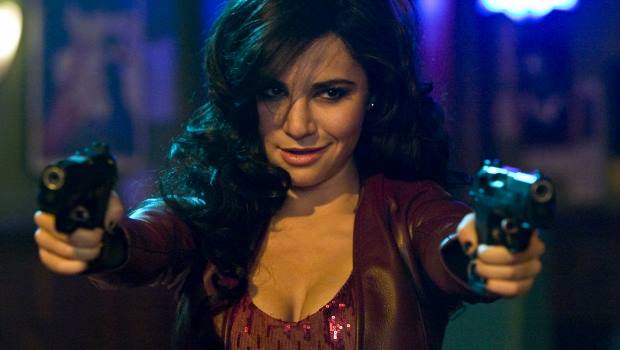 Summary: The assassin’s ball is more like a beleaguered school disco.

Joe Carnahan’s Smokin’ Aces was a glossy hitman actioner with plenty of famous faces getting in on the act to be the bad guys hunting down a Las Vegas performer-turned-snitch to claim a sizeable bounty. This straight-to-video sequel sees another man in danger of being terminated for a reward attractive to a selection of the badest guns for hire, but it’s sole focus seems to be providing as many opportunities for gratuitous violence rather than any kind of intricate plotting which made the original am enjoyable romp.

Walter Weed (Berenger) is an ageing FBI desk jockey seeing out his days at the Bureau when fellow agents uncover a plot to have him killed. A mysterious man known as Hal Leuco has offered $3 million to a selection of assassins including master of disguise Lazlo Soot (the returning Flanagan), vicious psycho McTeague (Jones), a family of killers led by dad Fritz Termor (Parks) with daughter Kaitlin “AK-47” (Reeser) and seductress Ariella Martinez (Higareda) who likes to bring death to her victims by poisonous kiss. Fearful for the reasons why Weed has been put on the hitlist, he’s holed up in a jazz club used as a safety house by the FBI. Seeming locked away in an underground security stronghold out the back of the club and surrounded by armed guards with undercover agents listening to the jazz, they await the arrival of the assassins with Weed only needing to survive past 3am for the bounty to become void.

With Smokin’ Aces, Jeremy Piven put in an entertaining turn as the sleazy victim Buddy “Aces Israel – he was an dislikeable man who deserved what was coming to him. The scenes with the agents protecting him were entertaining as he faced a grilling for his misdemeanours. Here, Weed is a dull character who has a backstory about how he killed his family in a car crash that left him unable to walk. More is hinted at, but there is not enough teasing to build up any interest in why he is being hunted down. With the FBI set-up littered with phrases such as “keep it light and tight” and general jargon, it’s left to the colourful assassins to inject the life into the movie.

In a bid to be hip and cool, director Pesce gives them each an introductory scene as they perform their signature killing method – McTeague likes to stick screwdrivers into his victims’ heads – but that’s all you get to know about them. The Termor’s snarl and squabble in a truck for most of the film in a despicable manner while Soot is the only other assassin to have much to do when he impersonates an FBI agent. The other pair turn up in the jazz club and share a slightly random intimate exchange in a shoot out, with the remainder of the movie filled with explosions, gunfire and a lot of shouting seen countless times in action flicks.

After the bullets have flown through the air in a bid to distract you from questioning the logic to the plot, Smokin’ Aces 2 tries to justify itself with a series of twists aiming to conclude with an air of smugness as though it’s caught us out. Given you’ll be past caring why Weed was put into the position he was by then, they fail to draw out a last gasp and the assassin’s ball is more like a beleaguered school disco.