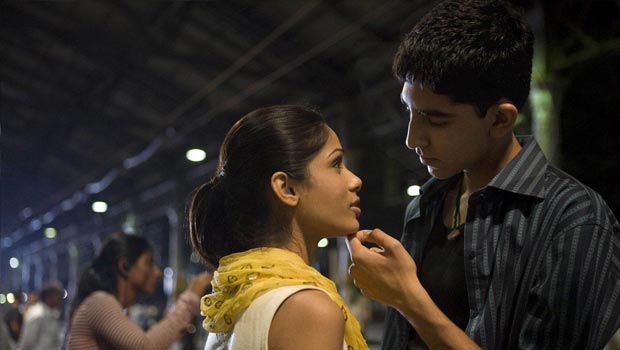 Summary: The ultimate feel good movie, and one that will stay with you a long time after the credits have rolled.

The latest feature from one of Britain’s ground-breaking talents is simply, distinctly – Danny Boyle. Slumdog Millionaire tells the formidable story of slum-dweller Jamal, his sibling Salim and fellow orphan Latika, as it charts his remarkable journey from the harsh streets of Mumbai through to adulthood in a moving, joyous, at times harrowing tale.

We start with Jamal’s (Patel) interrogation in a Mumbai police station by the local Inspector (Khan). His crime? He’s en route to becoming the first street kid to win the hugely popular Indian version of ‘Who wants to be a Millionaire’. Handed over to the cops by the ruthless anchor of the show (Kapoor), the question on everybody’s lips is – How could an ordinary teaboy get to the final? His story slowly unravels as he explains how his life holds the answers to all of the questions, and the 20 million rupee jackpot…

The film is told in flashback as Jamal recalls incidents in his life which build up a patchwork of stories; humorous, shocking, moving and brutal in turn. As the story unravels, you’re enthralled by the raw impact of it all, and the true reason for his appearance on the show.

This isn’t your Shining India, Boyle (Trainspotting, 28 Days Later) has managed to capture the real grittiness of urban India in this nigh on Dickensian tale. Here you get to see a starker, raucous side of Mumbai you’re not likely to see in a Bollywood musical. From the raw energy and poverty of the slums, to the inherent sense of camaraderie within those communities, and essentially the light that still manages to shine through the shit.

Simon Beaufoy (The Full Monty) has adapted a brilliant screenplay from Vikas Swarup’s much lauded novel ‘Q&A’. The former has got the tone pitch perfect and Boyle takes this tale of the underdog to the screen in a manic but tempered way. Slumdog harks more of Boyle’s earlier efforts, as the uninhibited chaos masterfully juxtaposes Jamal’s anecdotes, the gameshow and the status quo with brilliant fluidity.

It’s fantastic that he’s been able to capture the brutality of life on the streets with such authenticity, in a way seldom seen. Whilst documenting quick witted Jamal’s adventures and tragedies, the movie touches on India’s transition to 21st century superpower, whilst also emphasizing the all too great schism between the high rises and existence in the gutter.

The cast are superlative, especially the streetkids (as authentic as they come). Dev Patel is brilliant as Jamal, dazed at his own experiences as is Khan as the Inspector, analysing his ‘absurdly plausible’ story. Kapoor is apt as the underhand gameshow host, and Pinto (Latika) a stunning muse for Patel’s Jamal. The movie also features a pulsating contemporary soundtrack by A R Rahman, with some cranking tunes from neo-political rapper M.I.A.

This is the white knuckle ride to experience this Winter, as it brings on a barrage of emotions, and is relentless in its’ effect. It’s a tale that manages to make you laugh, cry, shudder at the thought and feel great at its’ conclusion. It is the ultimate feel good movie, and one that will stay with you a long time after the credits have rolled.