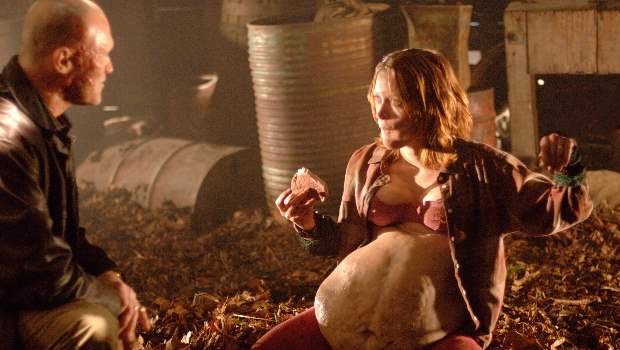 Slither owes enormous debts to most of the pioneering horror directors and films of the last 40 years, including Cronenberg’s Shivers, George Romero’s ‘Dead’ sequence, and, especially, Sam Raimi’s Evil Dead films. Which is all entirely appropriate, as Slither is easily the funniest – and goriest – horror comedy since Evil Dead II, with some spectacularly good special effects and a brilliant performance from new genre favourite Nathan Fillion.

Fillion plays police chief Bill Pardy in the small redneck town of Wheelsy, who carries a torch for high school sweetheart Starla (Elizabeth Banks), who’s married to local entrepreneur Grant Grant (Michael Rooker). Behind the idyllic façade however, Grant’s marriage isn’t quite what it should be, and on a stumbling walk back alone from the bar one night, he chances across the remains of a strange creature brought down in a meteor. Infected by the creature, Grant struggles to control his actions, killing neighbourhood dogs and indulging an insatiable appetite for raw meat, before he impregnates easy local girl Brenda (Brenda James) by spewing out hideous slug-creatures from his stomach. Before long, Grant has become something of a menace to the area’s cattle population, and Pardy sends out a team to bring him in. Chancing across the grotesquely distended and swollen Brenda in an outlying barn, Pardy is soon up to his neck in vicious slugs, and has to race against time to prevent Starla from falling into Grant’s evil clutches, and prevent Grant from infecting the entire town.

Slither avoids all the conventions that make modern horror films so resolutely unscary. Writer/director James Gunn’s cast are adults for a start, and the director is content to let the atmosphere build – and establish the characters – in the first half-hour, rather than leaping straight into the action. Fake CGI, jump-cuts and hyperactive editing are all banished in favour of graphic up-close violence and an atmosphere of creeping unease. Gunn has also realised that there’s something inherently funny about over-the-top body horror, and the gruesome deaths of minor characters are certainly entertaining, in a sick and unpleasant way.

Gunn also shows evidence of wider concerns that manage to lift Slither above the run of most horror films. In the alien hive-mind that controls the town, and that ensures every zombified character is an off-shoot of Grant’s personality, there are strange echoes of classic British sci-fi like Nigel Kneale’s Quatermass sequence, and 1970s Doctor Who. In-jokes abound as well, from the town’s mayor (Gregg Henry) being named Jack MacReady (Kurt Russell’s character in John Carpenter’s remake of ‘The Thing’), to the Romero-esque sight of stumbling zombies shuffling their way across the fields at night.

It’s unlikely Slither will have much appeal beyond a genre audience, but on this showing Fillion must surely be destined for the big time, imbuing his character with a genuine sense of sweetness, even while he’s up to his neck in killer slug-creatures. Funny, violent, and very gory.