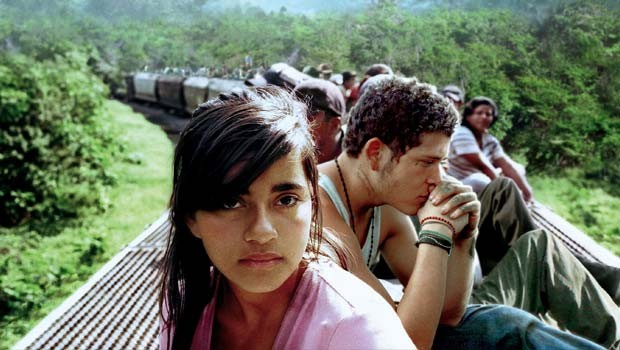 Summary: The performances, by a mixture of street kids and professional actors, are uniformly excellent; the direction polished and accomplished.

Anyone who thinks that illegal immigrants have an easy ride should watch Sin Nombre, a beautiful and immensely moving film from debut director Cary Fukunaga that illuminates exactly why millions of people risk everything in the hope of finding a brighter world. Executive produced by Gael Garcia Bernal, Sin Nombre won two Sundance Awards this year.

Casper (Flores) lives in Mexico; like many teenagers he has found safety, purpose and a family of sorts as a member of the Mara Salvatrucha gang; he has recently even bought them a new recruit, 12-year-old ‘Smiley’ (Ferrer), who defies his grandmother to throw in his lot with the Mara. After a brutal induction ceremony, he quickly takes to gang life. Casper, on the other hand, is desperate to distance himself from the gang and in particular to keep his relationship with Martha Marlene (Garcia) a secret, but his frequent absences make the gang’s leader, Lil’ Mago (Huerta Mejia), is suspicious.

When her father returns to Honduras from the US, where he has a new family, Sayra (Gaitan) has little choice but to agree to emigrate with him to Mexico, and hopefully from there onto the States. Once in Mexico, they join other immigrants waiting at the train yards for a US-bound freight train. When one finally arrives, they rush to board, as do Lil’ Mago, Casper, and Smiley, who are there to rob the immigrants. When Lil’ Mago makes to attack Sayra, Casper makes a fateful decision that will put his life at risk.

Director Cary Fukunaga exposes a world that everyone is aware of yet prefers to ignore; the very real fact of economic migration. ‘Our’ world – Primark clothes, cheap food – is built on cheap labour; the immigrants just want to work and better themselves, but they have no legal way of doing so. Filming on a real train, with real migrants, their journey is shown in all its gritty and tedious reality; sleeping, eating, living on top of a slow-moving freight train, every minute risking being caught by La Migra, or bandits, or injury, or simply dying from thirst if it doesn’t rain. But the alternatives are shown as so much worse; the gang life, while offering protection of sorts, comes at a price.
Smiley is rapidly brutalised and desensitized; he does what he needs to do to survive – including killing if necessary. While Smiley is a Lil’ Mago in the making, Casper is the one that gets away. His relationship with Martha Marlene softens him, and he realises he’s looking for a different kind of family. When he meets Sayra, trust is slowly built up between them; she needs him and he takes care of her. But no-one can protect him from the Mara, whose network runs all the way up the West Coast to LA and beyond.

The performances, by a mixture of street kids and professional actors, are uniformly excellent; the direction polished and accomplished. As the train snakes its way through Mexico, you live the journey with Smiley, Casper and Sayra. Once again the Latin Americans show us how it should be done. Eat your heart out Ken Loach.