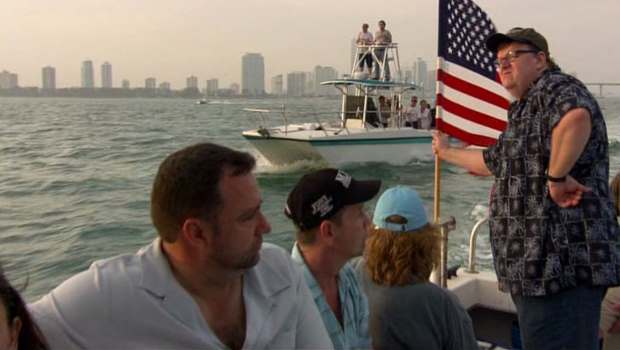 Summary: Michael Moore is often guilty of oversimplification but in Sicko he has produced his finest work to date. A near masterpiece.

Having covered gun crime (Bowling For Columbine) and the aftermath of 9:11 (Fahrenheit 9.11), thoroughly pissing off Republicans and people who can’t think for themselves in the process, documentary-maker and agent provocateur extraordinaire Michael Moore turns his gimlet glance onto the much-despised US Health Service to extraordinary and heartbreaking effect.

Opening on a few of the millions of Americans who can’t afford health insurance, so go without it, and hope for the best, Moore quickly moves on (though he still manages to make a few points on the way – the man forced by his surgeon to choose which of his two fingers to have reattached, as he can only afford one) to those who are apparently living the American dream with their health insurance safety net. Until they get ill…

Americans don’t have universal healthcare. Instead they have a free market economy where for an insurance company to make more money for its shareholders it behoves them not to pay out on claims. One might think that paying for healthcare for people who have paid their policies for years is the insurance company’s primary duty but of course its not. The insurance company’s raison d’etre is to make money. So there is, immediately, a gap between the insurance company’s expectations and those of its policyholders. Moore shows us how this came to be (good old Nixon!) and how people have tried to challenge it (Hilary Clinton) but failed, and he compares American health care – worst in the developed world despite being the most expensive – with that of other countries, primarily Canada, the UK and France.

This last aspect of the film may be greeted with scepticism by Brits horrified by headlines about waiting lists, superbugs, and old people left to die of dehydration, but the fact is that noone here will force you to choose between your ring and your middle finger if you should carelessly chop them off in an accident. They might tell you that you have to go to the toilet in your bed of course… And as we know the health service and welfare provision in France is second to none which is why we go there to use it. The French pay through the nose for their healthcare, naturally, but still seem to live comfortable and fulfilling lives despite what we would consider a ‘crippling’ tax burden.

But where the film cuts deepest is when Moore begins to tell just a few of the many horror stories that were submitted to his website. The couple now living in their daughter’s basement, bankrupted by their insurance bills. The bereaved mother whose daughter died when doctors at her local hospital called security and made her drive across town to the ‘approved’ hospital. The girl presented with a bill by her HMO because she didn’t get permission before calling an ambulance to the scene where her car had crashed and she was unconscious, trapped in the wreckage. And then there are the 9:11 rescue workers.

On September 11, 2001, when the planes smashed into the twin towers, it wasn’t just New York City Emergency Services who rushed to the aid of the trapped survivors. The 9:11 heroes, their health ruined by smoke inhalation, assumed that they would be cared for by the country they had risked their lives for. But only the New York City workers received compensation; many others, unable to work, subsist on welfare. Moore decides to take them to the one place in America where universal, free healthcare is available, and its in Cuba, the place they have been taught to think of as the epitome of evil, that they receive the help and care that they cannot get at home, in America, Land of the Free, the richest nation on Earth. Their helplessness and their gratitude is heartbreaking and when they meet Cuban firefighters who greet them as brothers, well, if you aren’t choked up, you must be dead inside.

Michael Moore is often guilty of oversimplification but in Sicko he has produced his finest work to date. A near masterpiece.

DVD extras include a profile of Tony Benn (a contributor), extended interviews from the film, and a music video from Tom Morello (formerly of Rage Against The Machine).