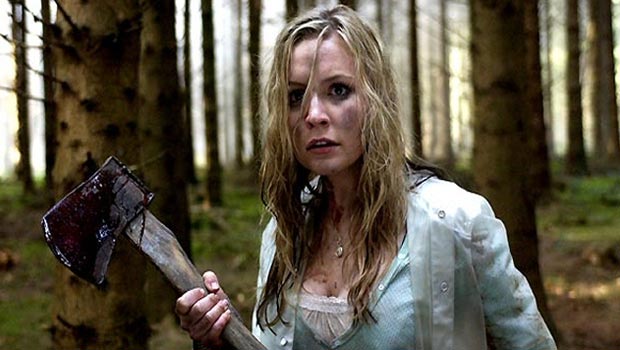 Summary: The trips are vividly conveyed – but in the end it feels a terribly predictable and the twist is less than shocking.

I should state for the record that I don’t like horror films. Not at all. I quite liked The Faculty, and that’s about as scary as I like films to be (though I liked Severance – it was engagingly bonkers and extremely funny). I especially dislike films that involve groups of attractive yet stupid young people who choose to spend their weekends in haunted houses or camping in terrifyingly creepy woods, or accept lifts from dodgy looking men or give lifts to hitch-hikers. I get no kick from seeing these comely-but-dozy young things hacked to death. I have better things to do with my time, on the whole.

However, Shrooms intrigued me. First of all, it has a great marketing campaign. ‘Prepare to get wasted’ is a fantastic copyline; I can’t believe it hasn’t been used before, as it works for so many films. And then there’s the whole magic mushrooms thing. I mean, they’re not exactly the cinematic drug of choice, are they? Nice shiny white lines, or the gleam of a needle and the snap of a tourniquet, or brewing a cup of unpleasant grey tea? You can see why directors have generally gone for the hard stuff.

Anyway, our motley crew of victims are Americans Tara (Haun), Lisa (Hazen), Troy (Kasch), Holly (Greczyn) and Bluto (Hoffman) who have come to spend a few weeks with their friend Jake (Huston) in Ireland sampling some of the Emerald Isle’s finest produce. No, they’re not drinking Guinness. Jake, who though presumably Irish has a strange English accent, doesn’t take them to Kinsale and feed them oysters and soda bread washed down with pints of the black stuff. They should ask for their money back, frankly, because instead he drags them off to possibly the most sinister woods ever, inhabited by weird looking, inbred locals, makes them sleep in tents, and tells them scary stories about haunted houses and dodgy priests/child abusers.

At this point, I’d be off to the pub, but our foolish cast are still lured by the prospect of giggling for hours so despite some bickering they stick around and head off mushroom hunting. Even though someone ACTUALLY SAYS ‘No-one ever died of shrooms’. But when Tara eats a Deaths Head mushroom everything starts to go horribly wrong, but they can’t be sure if what they are experiencing is real or not…

Shrooms has some nice touches; some funny lines of dialogue, a couple of sparky, original moments (the talking cow) and some beautiful photography – the trips are vividly conveyed – but in the end it feels a terribly predictable and the twist is less than shocking. The young cast of unknowns are fine in disposable, stereotypical roles, apart from Jack Huston whose accent is bizarre. It just feels a bit too much like you’ve seen it before. Probably because you have.