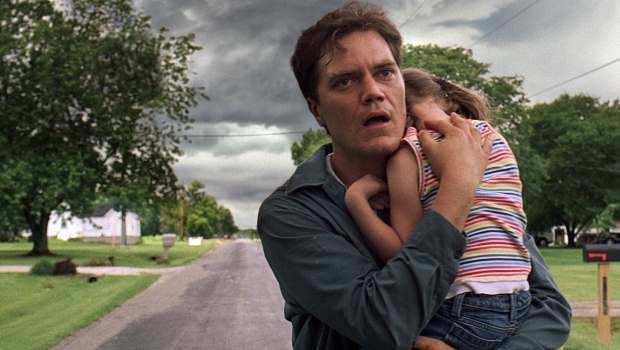 Summary: A nice bit of counter-programming to all the big summer movies.

I’m typing this lying in a hammock. Health and safety would probably have something to say about this, and it’s not particularly comfortable, as my arms are sort of trapped down by my sides, and I have to crane my head at a weird angle to see the screen (also the gentle rocking is making me sleepy), but it’s summer! And who knows how long it will last? So I refuse to go inside and sit at a desk. Carpal tunnel syndrome be damned.

Shotgun Stories is one of those low-budget, quietly understated American indies, like All The Real Girls, that’s kind of pleasant and has some funny moments but doesn’t really set the world on fire. It’s the story of two sets of half brothers, living in small town Arkansas: Son (Shannon), Boy (Ligon) and Kid (Jacobs) Hayes were abandoned as kids by their drunken father, who then proceeded to sober up and reinvent himself as a respectable citizen, remarry, and raise a new family. As the story opens, the boys’ father has died, and Son decides that they will go to the funeral. He spits on his father’s grave, and his half-brothers, not surprisingly, take offence. A simmering resentment flares up into full-blown rage, and the two sets of Hayes boys are consumed by it.

Revenge is pointless, says Shotgun Stories, and it is right. Look at Romeo & Juliet. Yet many films encourage us to cheer when the baddy gets his comeuppance; the story is predicated on the notion that revenge is, necessarily, a good thing. Usually because something deeply unpleasant has happened to the hero and therefore the revenge is justified; the hero is sympathetic.

Shotgun Stories attempts a more realistic depiction of a revenge scenario. The person who deserves the Hayes boys’ anger is dead, and so the rejected sons take their revenge on their privileged half-brothers. But of course it isn’t their half-brothers’ fault, and all you end up with is an eye for an eye and everybody blinded through their own stupidity. The boys’ rage and frustration, their reaction to the way they have been treated by their father, is valid; their actions less so. They are ordinary people reacting to pain and anger in extraordinary ways; violence does not come naturally to them. They struggle to express themselves and often seem baffled by their lives; all they have is their pride but its this same pride that will be their undoing.

These are not the glamorous people that normally inhabit American movies; the setting has a raw beauty, all cotton fields and fish farms, but the town itself is a bit of a dump. You can imagine how stifling growing up there would be. It’s hot; people move slowly, talk slowly, think slowly. They are eccentric, but not in a self-consciously wacky way; at the start of the film Kid is living in a tent in the garden. In one scene the brothers set up an old air-conditioning unit in the garden and enjoy a cold beer in the breeze.

Shotgun Stories is a mite ponderous; like its characters, it moves slowly, but inevitably, like a Greek tragedy. A nice bit of counter-programming to all the big summer movies.