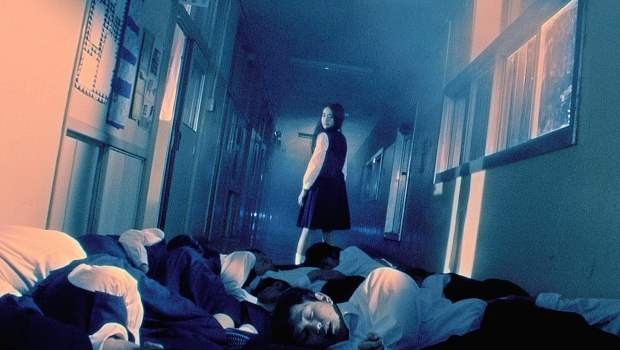 Summary: Here Shimizu provides an example of why he’s been held up as a horror master.

While Hollywood has been going crazy for the most advanced forms of 3-D it can find to add another dimension (and not to mention an inflated price) to moviegoers, it might come as a surprise that the first Japanese horror Shock Labyrinth is presented in the old red and blue style rather any kind of new age 3-D. Shot by Takashi Shimizu, the writer-director of Ju-On/The Grudge franchise, he presents his latest spooky project in 3-D which is never jaw-dropping but does up the tension at key moments.

Shimizu’s horror subject for Shock Labyrinth 3-D is based on the world’s largest walk-through ‘haunted house’ – The Haunted Hospital at the world famous Fuji-Q Highland theme park. A small group of children venture into the attraction out-of-hours but their innocent escapades take a sinister twist when one of them, Yuki, mysteriously disappears seemingly by being pulled down a corridor into the darkness. Here Shimizu provides an example of why he’s been held up as a horror master: the sight of Yuki being engulfed by the shadows is striking, and will creep you out everytime it is replayed in the film as the narrative switches between past and present.

Fast forwarding 10 years to the present, Yuki reappears and is reunited with her friends. But when she collapses the only place they can find suitable to treat her is at a hospital which looks eerily similar to The Haunted Hospital Yuki was first lost in. As events start to resemble that of the night Yuki first went missing, Shock Labyrinth comes into its own with disturbing images and images of the past merging with those of the present. Shock Labyrinth then offers up an unsettling battle for the teenagers to survive the hospital without the ghostly presences killing them which drives up the tension thanks to an equally unsettling soundtrack.

The 3-D works in places – the falling of rain and fluff over the screen looks effective and adds depth to the picture, however there’s very little else to make use of the format, and the red and blue haze you’re forced to watch through is distracting. Thankfully the DVD comes with both 2-D and 3-D variants so you don’t have to watch the oddly-shaded version but it is worth a look. After that, still to the 2-D as it packs much more a haunting punch.