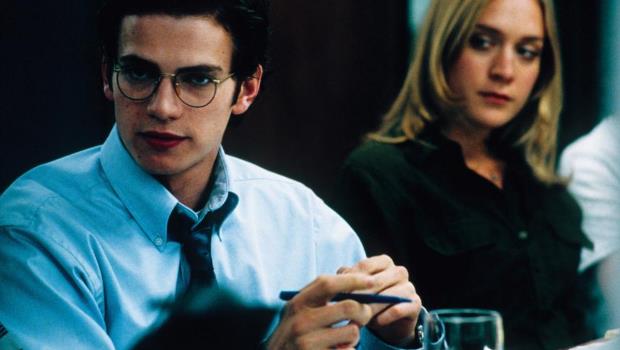 Summary: It works as a drama, contains many of the juicier elements of a thriller and is a savage assessment of the short professional life of a would-be alchemist of words who attempted to create the truth out of fiction.

Shattered Glass proves that the view from the floor can often be distorted. A biopic ostensibly based around the true-life rise and fall of one of America’s most precocious young journalists, quickly becomes an engaging insight into the perception of truth.

In the 1998 Stephen Glass was a man with a future. At 24 he was contributing articles to Rolling Stone and Harpers, whilst working as a staff reporter for the venerable political journal The New Republic; a publication held in such high esteem by the American establishment that it was nicknamed “the in-flight magazine of Air Force One”. Told retrospectively, Hayden Christensen, playing Glass, begins the film as the epitome of fresh-faced dedication and ambition. He is accommodating to his peers, respectful of his superiors and conscientious about his writing. Enviable vapour trails of wit, charm and ability follow Glass wherever he goes and an exhaustive dedication to his craft, shedding light on many up-to-the-minute issues, wins him the loyalty of the shop floor.

As Stephen’s reputation skyrockets, his articles becoming more and more important to the content of The New Republic, the cracks start to appear. When Michael Kelly (Hank Azaria, the voice of Mo, and many others, in The Simpsons), the journals’ long-standing editor and habitual defender of Glass’ “gonzo-style” techniques is sacked, Glass loses his mentor, a powerful ally and the benefit of the doubt. The film uses the ensuing power struggle to complicate Stephen’s own story by making a number of relevant points about the instability of the modern office environment. The newly selected editor Chuck Lane (Peter Sarsgaard) is regarded by his peers as obsequious and grovelling, apparently wangling his way into the affections of the magazine’s owner Marty Peretz (Ted Kotcheff) so that he was the natural choice as replacement. However, the audience is made acutely aware that the reality is somewhat different, Lane’s bad reputation is born out of envy, and the film’s rigorous examination of the apparent subjectivity of truth soon kicks in. Lane is well aware that the position is something of a poison chalice and we witness his personal misgivings; Peter Sarsgaards’ subtle portrayal of Lane fleshes out the films’ most interesting character.

After being alerted by a rival journalist that Glass’ investigations may not be entirely rooted in fact, Lane goes on the offensive, and people in the office begin to draw lines in the sand. Glass finds himself the champion of his colleagues in the fight against Lane’s perceived lack of leadership, but all the while he scrambles to substantiate the tall stories that he told. The film splits loyalties between Glass and Lane, so that it becomes hard to know entirely what transpired until the conclusion, giving the film the added lure of a good thriller.

Shattered Glass is a well judged, superbly taut drama that achieves its director’s aim of being the cinematic equivalent of good reporting. Glass’ rise and fall is the central focus of the film and provides most of the riveting tension, but as the facts become less fragmented the audience is invited to analyse every scene like a proofreader with a red pen. The story begins in a mess of distorted facts; manipulated to force a well-timed rhythm onto the narrative, that are untangled over the course of 2 hours. As the lies continue to pile up, our job is to sift through them. Hayden Christensen plays the compulsive liar with an easy charm, proving to naysayers unimpressed with his portrayal of Anakin Skywalker that he really can act, his favourite comeback in the film: “Are you mad at me?” displays enough vulnerability to mask his pathologically deceitful inner self. Glass simply can’t stop lying and as his attempts to keep his head above water whilst digging even deeper ditches provides the fuel that propels the story along to it’s inevitable and damning conclusion.

The state of modern journalism and the intricacies of office politics are dissected vigorously in Shattered Glass, and whom we most closely associate with in the film is constantly being questioned, until it is a real surprise to see who ends up as the good guy. It works as a drama, contains many of the juicier elements of a thriller and is a savage assessment of the short professional life of a would-be alchemist of words who attempted to create the truth out of fiction. The biggest compliment I can pay the film is that it just might make you think twice about what you read in the papers.