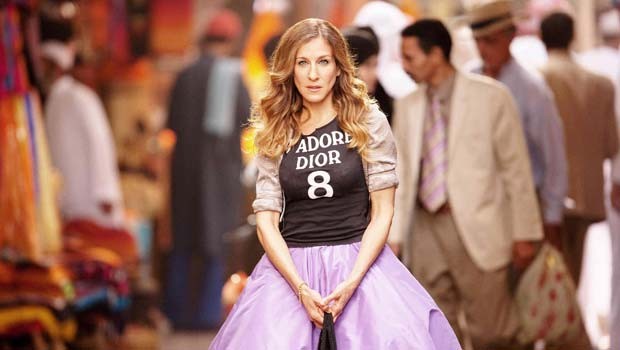 Sex and the City 2 Review

Summary: At best it could be described as a woefully misguided and unfunny romp.

The sad thing about writing a review of films like Sex and the City is that you know that your words will be completely ignored; films like this are utterly critic proof, existing in a special protective bubble. That said, for what its worth, here’s my review…

So, where were we? At the end of the first film (which I should add, I enjoyed, despite some silly moments), Carrie (Parker) had finally married her Mr Big (Noth), after almost ruining things due to her monstrous ego; Charlotte (Davis) had safely delivered her longed-for baby daughter; Miranda (Nixon) had forgiven Steve (David Eigenberg) his infidelities, and Samantha (Cattrall) had left her lover Smith (Jason Lewis) and moved back to New York. We pick up with the ‘girls’ (Samantha is now in her fifties and dealing with the menopause!) two years later. Domesticity is getting them down (except Samantha, who is keeping herself busy with hormone replacement therapies that include greasing her vagina. At work. At her desk. In her glass walled office. This was only one of several scenes involving Cattrall where I covered my eyes in embarrassment.)

Carrie loves Big, but – horror of horrors – now that he’s married he’s quite happy to come home and park himself on the couch and watch television. (Considering that SATC began life as a tv show this sneering attitude to the medium is a bit strange.) Miranda is torn between her demanding job (complete with chauvenist boss) and being a mother; Charlotte is finding full-time motherhood too much to bear, and is also worried that husband Harry might be a little too interested in nanny Erin (Alice Eve). Samatha has the answer – an all expenses paid trip to Abu Dhabi and a little me time is all they need.

The next bit of the film feels like nothing so much as a promotional video shot by the Abu Dhabi tourist board (very odd considering that the film was actually shot in Morocco). There’s a lot of oohing and aahing at the hideous décor of the lavish hotel suite, and lust (on Samatha’s part) for the personal butlers they are assigned (including Spooks’ Raza Jaffrey), as well as the Australian rugby team who are for some reason staying in their hotel. They go to a disco, do some karaoke, go camel riding in the desert, and buy things. At this point, a good hour and a half into the film, I wondered if there was ever going to be a plot; there is, and his name is Aidan (Corbett), Carrie’s ex. Who she cheated on with Big, and then dumped for being boring, fact fans. Now, however, the mere sight of him sends her all wibbly. In the meantime Samantha is, predictably, arrested for lewd public acts and the sweet deal with the hotel being over, the gruesome foursome decide to get the hell out of Abu Dhabi. This leads to another embarrassingly awful scene in the souk, and the patronising revelation that under their burkhas, Muslim women dress just as badly as New Yorkers.

It’s actually hard to describe just how bad Sex and the City 2 really is. At best it could be described as a woefully misguided and unfunny romp. At worst – well, it’s pointless and plotless, witless and stupid, racist, sexist, vulgar, deeply insulting and really, really long. The characters have been reduced to caricatures, interested in nothing but sex and shoes. The vision of female friendship and solidarity that made me forgive the tv series some of of its more idiotic moments has gone; instead we have four massively privileged women whining on and on about their problems, which by the end of film have all disappeared at the convenient wave of a magic wand. The consumer vision that formed part of the escapist fun of the first film now feels very regressive in the face of austerity measures, budget cuts and redundancies. And finally – where was the City? New York was always the fifth character, not Abu Dhabi. I really hope this film bombs, if only to avoid the hideous spectacle of a sequel. Kill the franchise now, please.