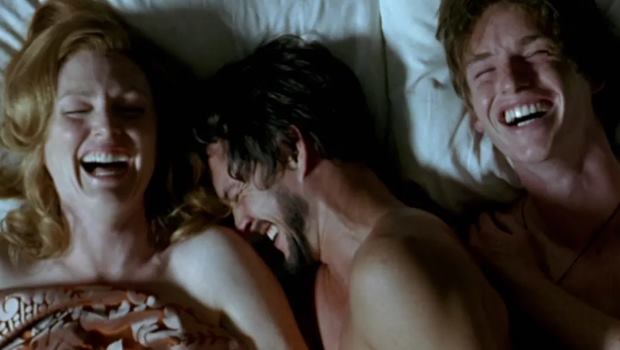 I have just come out of a screening of Wall.E and – well, move over, Son of Rambow. We all know how superlative Pixar are and yet somehow they raise the bar every time. They have created another charming, touching, funny and beautiful film that is both timely and an instant classic. I don’t know how they do it but I just hope they carry right on. Wall.E is a strong contender for film of the year so far and will do massive business. Oh, and there’s the usual great little short at the beginning too – not as superb as Lifted, but close.

About as far from Wall.E as you can imagine, and as depressing as that film was uplifting, comes Savage Grace, the sordid tale of Barbara Daly Baekeland (Moore) and her decadent, dysfunctional life and death. (Note to filmmakers: just because a story is true, doesn’t necessarily make it interesting.) Anyway, Barbara is a middle class beauty who manages to get her hooks into Brooks Baekeland (Dillane), dilettante heir to the Bakelite fortune. The toast of New York, Brooks and Barbara have nothing in common, and their marriage is a lot like torture: Brooks is embarrassed by Barbara’s social climbing, and treats her with disdain; in return she cheats on him publicly. Nonetheless they manage to produce a child, the longed-for heir, Tony (Redmayne), and set off for Europe (its never really explained why).

At this point the film jumps from New York to Paris to Spain and a period of about ten years passes; suddenly Tony is fully grown and its clear that he is gay. Brooks doesn’t want to accept this while Barbara, seemingly in the hope of ‘curing’ him, encourages him to sleep with girls, including Blanca (), a pretty Spanish girl he meets on the beach. Unfortunately for Barbara, Blanca also catches Brooks’ eye, and soon the two have moved in together.

It is at this point that Barbara and Tony’s relationship, already worryingly co-dependent, becomes mutually destructive. Sam (Dancy), Barbara’s art dealer, visits them, encouraging Barbara to start painting again, and ends up sleeping first with Barbara, then with Tony, and finally with both of them at the same time. Tony’s mental instability is becoming obvious and, as it’s a well known story, its not giving anything away to tell you that Tony stabs Barbara, orders Chinese, and eats it while he waits for the ambulance, though not before they have indulged in a drawn out and painfully disturbing sex scene.

Savage Grace is woefully misjudged on so many levels that it’s hard to know where to start. It has been fifteen years since director Tom Kalin’s debut, Swoon, and maybe he was too in awe of Julianne Moore to actually direct her, but marvelous actress though she is she struggles to find the humanity in Barbara, who comes across as monstrous and affected by turns but never, ever sympathetic. What, after all, is one supposed to think about a woman who asks her 12-year-old son if he will still love her when her tits are sagging? All the characters are not only unlikeable, they are also left totally unexplained; we are never given a clue to their characters, never get under their skins. This isn’t helped by the arch dialogue and the posturing of Dancy and, even, occasionally, Moore, and the episodic nature of the storytelling. The denoument comes almost from nowhere; it’s inevitable, like a greek tragedy, therefore no explanation is necessary.

But in the end, maybe it’s just that decadence isn’t divine, it’s tawdry. These seem like wretched, selfish, bored people, and unfortunately that’s also a pretty accurate description of the film. Still, its one reason not to envy the rich.

The book on which the film is based comes highly recommended though, covering a hundred years of the Baekeland story. But Julianne Moore really needs to get a new agent.