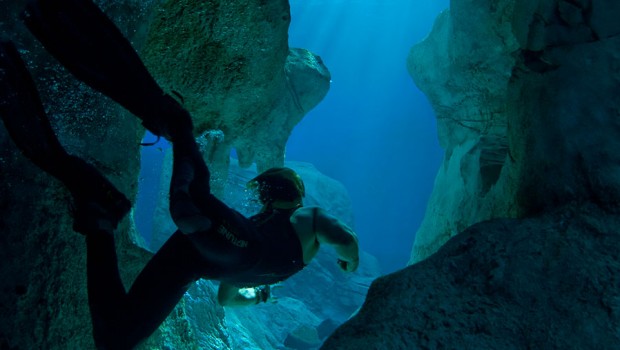 Summary: Perhaps Sanctum works better when watched in the 3-D format for which it was intended.

James Cameron has made two of the highest grossing films in the world with big budget effects and epic stories. Titanic and Avatar are undoubtedly products of his passion for film, but when he turned his passion of cave diving into helping produce Sanctum with fellow diver and collaborator Andrew Wright, the magic touch did not transfer to director Alister Grierson. Based on Wright’s true story of when he and his team were trapped inside an underwater cave network for days, the real life characters are replaced by stereotypes seen in all too many disaster flicks while the visual boost Cameron’s 3D technology would have given the underwater scenes in the cinema are lost on a 2D screen.

Sanctum’s plays straight into the generic with its set-up of master diver Frank McGuire (Roxburgh) leading an exploratory team into the South Pacific’s Esa-ala Caves for thrillseeker moneyman Carl (Gruffudd) who gets his fiancé Victoria (Parkinson) along for a major breakthrough into a new area of the underwater caves along with Frank’s son Josh (Wakefield). When a freak storm sees the only known entrance to the cave system blocked and flooding fast, the whole team is forced to go into unknown territory of increasingly narrow gaps, challenging rock climbs and the knowledge that there may not even be a way out even if they did have unlimited air to get there. Quite a conundrum for the team of divers, but the tension is difficult to be felt with such flat characters.

Frank is painted as the man you don’t know whether to trust early on when he effectively kills a fellow diver when they become trapped arguing it was the right choice or they both would have died which sets him at odds with his son Josh who has never felt close to his father and questions his motives. Carl is the all-too-eager-to-please the opposite sex kind of guy who will take risks and the diver team are generally there to be sacrificed to the caves and build impending doom. If it wasn’t so obvious who would die how, why and when it would be more enjoyable, and having the fresh-faced Josh on board gives some clear signs as to where this film is heading very quickly.

Perhaps Sanctum works better when watched in the 3-D format for which it was intended. The caves look amazing and a lot of impressive work has gone into capturing them – you can see why a diver such as Cameron would have found Sanctum such a thrill to make as putting his passion on screen for others to see visually must have been fun. Wright’s true story is a compelling basis for a movie as we’ve seen many insightful survival stories on screen recently including the Oscar-nominated 127 Hours. Sadly for Sanctum, putting the fiction into the story loses the human edge and it feels forced. It would be better to watch a documentary about cave diving – or the real life story on the DVD.