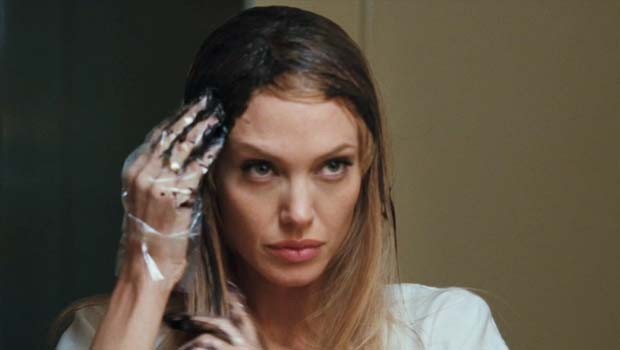 Summary: You have to take it on face value to find the entertainment – and there’s plenty to enjoy here thanks to Jolie.

Angelina Jolie shoots for action heroine status after Wanted and Mr & Mrs Smith worked wonders for her at the box office, but this spy thriller is about as smart as Jolie’s previous gun-loving roles as Lara Croft in the Tomb Raider franchise which never got out of second gear. Here she plays top CIA agent Evelyn Salt, a prized operative captured by the Russians and only saved when her husband finds out where she is and has her exchanged for an American-held Russian spy. Returning to work in the States, she is set up by a Russian defector who convinces her superiors that she’s a double agent sent to assassinate the President of the United States. Forced on the run, she must use her spy skills to prove her innocence and expose the traitor.

We all know Jolie is aptly equipped to take centre stage armed with a gun in more light-hearted actionfare, however Salt seems to want to be more than just entertainment. The title Salt stands for Strategic Arms Limitation Talks – talks during the Cold War between the USA and Russia – giving an impression this will have a political relevance to go with all the fights and shoot outs. The film even begins with Salt tied up in her underwear being tortured by her Russian captives. But the gritty realism is soon lost. There are set-ups borrowed from James Bond’s outings, such as a cross-border prisoner exchange, and the nods to Cold War tensions come across as the easy option to provide some bad guys for an espionage thriller in the style of Mission: Impossible – it’s no surprise Tom Cruise turned it down citing the similarities being too close.

Director Phillip Noyce has been in this territory before in the laughable film version of popular television series The Saint which saw Val Kilmer adopt various ridiculous disguises. Here he manages to get Jolie to try her skills at going incognito which are only mildly more successful. Thankfully there is a saving grace for Salt, and that is Jolie. She throws herself into the action scenes as she did in her Lara Croft role, making for a game action heroine once more. Against her bland supporting cast of Liev Schreiber and Chiwetel Ejiofor who look thoroughly unimpressed with their endless scenes in suits talking about the plot, Jolie’s having a blast as she kicks and shoots her way to justice. Noyce’s Jack Ryan efforts Clear and Present Danger and Patriot Games were effective political thrillers and he tries to echo those with Salt. However, you have to discard the attempts at making Salt too serious as its plot is not up to the lofty heights to which it aspires. You have to take it on face value to find the entertainment – and there’s plenty to enjoy here thanks to Jolie.