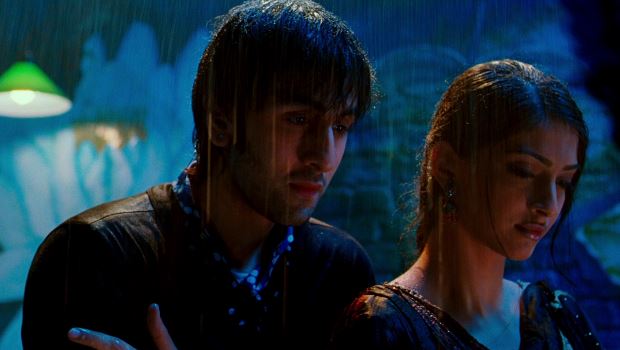 Saawariya is an epic ballad, poem, sonnet by one of the greatest visual poets of our time – Sanjay Leela Bhansali. Bathed in a sea of blue and green hues, this is based on Dostoevsky’s classic short story White Nights telling the story of a young star-crossed couple across four nights.

Saawariya meaning beloved tells the story of a young dreamer Ranbir Raj (Kapoor) free spirited and an idealist – he arrives in a dreamy surreal town and joins the house band as a lead singer in its’ swankiest club. Here he bumps into Gulab-ji (Mukerji), a prostitute who immediately falls for his naivety and innocent charm.

One night he evokes the notice of a mysterious girl standing alone on a bridge, holding an umbrella and looking oh so mysterious… As he tries to strike a conversation, she shies away. But he still keeps following her, she slowly gains his trust and both end up becoming friends. The mysterious girl is Sakina (Sonam Kapoor) who continues to leave Ranbir intrigued. But so mesmerized he is with her that his every thought and conversation is dominated by her.

Just when Ranbir is about to express his true feelings to her, she reveals the reason behind her unhappiness. She tells him she is waiting for her long lost love, Imaan (Khan) to return. A year back before leaving, he had promised that he would return to meet her on the same bridge Ranbir first espoused her.

This is special for a number of reasons. The film is due to be released by Sony Pictures Entertainment worldwide and has thus become the first Indian movie to be co-produced and distributed by a Hollywood production house. The first official teaser of the film was also accessed by the New York Times and given rave reviews. It is also the launchpad for two of Bollywood’s biggest stars – Sonam is the daughter of Anil Kapoor, and Ranbir the son of Rishi, and grandson of the legendary Raj Kapoor. There are many references to the latter in this movie – with the main protagonist (Ranbir) based on his own grand-father’s famous vagabond cum Chaplin-esque tramp from Shree 420.

But probably most importantly auteur Bhansali is a brilliant, visually “wow” film-maker. He has produced modern classics such as Hum Dil De Chuke Sanam, Devdas and Black, effectively re-writing Indian cinema with his own cinematic vocabulary. An easy and cheap comparison would be with Baz Luhrmann. It remains to be seen whether he can do the same with the first Bollywood production with bonafide Hollywood backing and distribution. We for one, can’t wait…