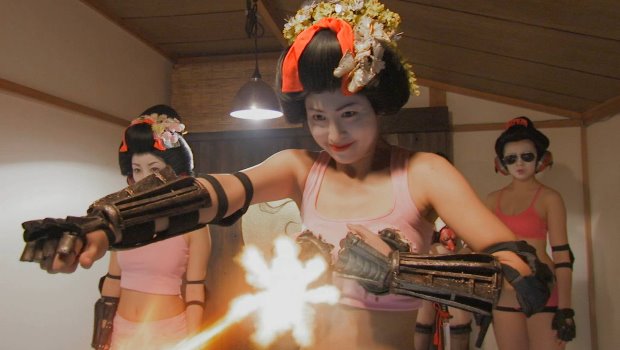 Summary: Robo-Geisha sustains his momentum as pioneering the hyper-real Asian offerings, though he needs to find a way of adding substance to match the quirkiness.

When director Noboru Iguchi unleashed the visceral shoot-em-up-fest of The Machine Girl on Asia’s extreme cinema scene, he strapped a minigun to a Japanese schoolgirl in place of a chopped off arm and let her run havoc against the ninjas who killed her family. Ultra violent but played for laughs in a comic-book style, Iguchi found an instant cult hit that has seen Tokyo Gore Police and Vampire Girl Verses Frankenstein Girl follow the trend for zany cinematic gore explosions. High on fantasy, Iguchi’s back in the director’s chair for Robo-Geisha, and he brings out a breast-implanted minigun for hyper-real starters.

Robo-Geisha’s got a typical family feud at its heart: two warring sisters who can’t seem to get along and need to work out their differences. One, Kikue (Hitomi Hasebe), is a geisha vying for approval from wealthy men who will buy her company, the other, Yoshie (Aya Kiguchi), is the younger and clumsier of the two who gets no attention at all. When a successful businessman sees Yoshie’s potential – a private athletic moment he witnesses secretly – he transforms her into a geisha too, but not a normal ethereal being as is tradition. No, he wants to use Yoshie and Kikue as robo-geisha’s alongside his deadly Tengu assassins for a megalomanic deed which threatens the whole of Japan. He uses their hatred for each other to achieve his aims, overseeing their transformation into efficient killers with blades springing from their armpits and napalm from their hair to defeat his enemies.

While Iguchi once again excels in bringing his wacky imagination to life on screen with shurikens firing out from the Tengu assassin’s back sides and circular saws protruding from mouths, Robo-Geisha adopts a more comic tone than The Machine Girl which is haphazard. The constant bickering between the sisters means it can border on the juvenile at times and the fight scenes are often dropped in what seems to be random places. Of course, to expect too much sense from Robo-Geisha would negate its key plus-point: never quite knowing what Iguchi will think of next. When a temple transforms into a giant robot and goes on demolition duty through Japan in true Godzilla style he reaches his peak in this case, and it’s a wonder what he’ll follow this up with. For now, Robo-Geisha sustains his momentum as pioneering the hyper-real Asian offerings, though he needs to find a way of adding substance to match the quirkiness.