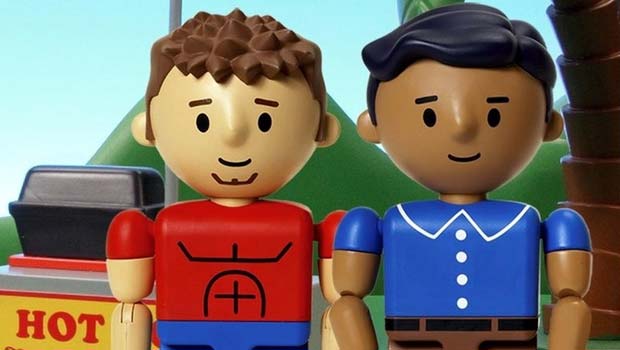 Rick & Steve: The Happiest Gay Couple in All the World Review

Summary: If you enjoy one episode, you’ll enjoy them all.

Kids’ toys get rude in Rick & Steve, an adult animated series about the fictional gay ghetto of West Lahunga Beach. Aiming for a South Park-style tone of humour cutting as close to the bone as possible, it’s got that childish look which at first glance might deceive you into thinking it couldn’t offend anyone. Any such view will soon change once the characters start swearing and talking about lewd acts they want to do to each other. It’s enough to raise eyebrows and a faint smile from time to time, but the life of three gay couples fails to do much more unless you fully know the real-world context it’s lifted from.

Rick and Steve are supposedly the happiest gay couple in all the world facing a few issues: Filipino-American Rick is a nerdy Mensa member whose gym-going, six-pack sculpting white boyfriend Steve want to add spice to their sex life with a threesome. A lesbian couple Dana and Kristen, one typically boyish and the other a butch man-hater, add another perspective to proceedings to make a so far, so normal gay-interest comedy. The relationship between a 50-year-old wheelchair-bound HIV positive Chuck with 19-year-old Evan suggest things are going to get a little bit politically incorrect, then Kirsten and Dana decide they want a baby… with Rick’s sperm. This fuels all sorts of debates about sex, relationships and the world, and a meeting of a whole load more gay stereotypes such as the cage-dancing clubbers, a cross-gendered stud and Steve’s gay-bashing parents who don’t know he’s gay.

Coming from within the gay community, it is surprising Rick and Steve sticks so regimentally to the caricatures it creates. Initially the combination of crass, no-nonsense toys might provide curiosity, but the mild amusement of children’s playthings act out adult situations struggles to keep the episodes alive. Like South Park, the creators need the veil of innocent simplicity to keep it coy and approachable; unlike South Park, Rick and Steve lacks the political sensibilities which make it so relevant. An award winner at numerous gay film festivals, it is more unashamedly for a gay audience who will know where the humour stems from: those looking in are going to miss the point. Lacking cross-over appeal is no bad thing, yet it makes it harder to recommend outright. If you enjoy one episode, you’ll enjoy them all. If one fails to raise a smile, it’ll be the same for the series.