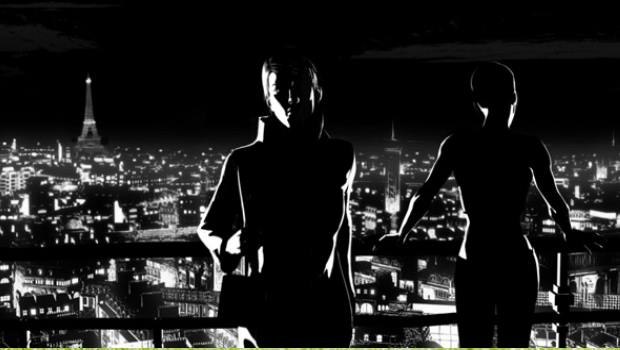 Summary: The novelty of the look wears off rapidly and then all you’re left with is an overly convoluted detective flick.

Paris, 2054. When Ilona Tassueiv (Garai) is kidnapped, her employer, Avalon, a giant multinational, want her found at any cost. The gendarmarie sent in Bartholomew Karas (Craig), a specialist in hostage retrieval and the most controversial cop on the force, at the request of Dellenbach (Pryce), Avalon’s CEO. Karas digs up links between Ilona, who was one of Avalon’s star researcher, and the disgraced scientist Jonas Muller (Holm). As Ilona’s mentor, he encouraged her research; she was particularly interested in Progeria, diseases of premature aging in children.

Going to Ilona’s apartment to search for clues, Karas meets Bislane, Ilona’s beautiful older sister. Bislane is the opposite of Ilona, living on the wrong side of the tracks and at home in Karas’ world. The two begin a romance, but Bislane is following clues of her own – on the night Ilona was kidnapped she visited Dmitri, a Russian drug dealer and friend of Bislane’s. Meanwhile, as Karas gets closer to the truth, people around him start dying; mysterious assassins follow him, and he realises that not just Ilona, but the future of humanity itself may be at stake.

Renaissance is set in a futurescape familiar from Minority Report and a thousand other sci-fi films. Advertising is everywhere, and most of it focuses on the eternal quest for youth – the ubiquitous Avalon Corporation being at the head of this search, Its never really made clear what Avalon does or sells, it just is. Juxtaposed with this future landscape is the classic Chandleresque detective; Karas, like Deckard in Blade Runner, is the only man for the job, the outsider, in this labyrinthine urban jungle. The story exploits classic film noir elements but gives them a modern visual style.

The French team of animators have used motion capture and computer animation to create a quirky 3D world; it’s a stylish and unique view of future Paris. It doesn’t work as well with people – sometimes it feels like an issue of Bunty come to life. But sadly where the film falls apart is the story, which is unnecessarily complicated and difficult to follow. This may be, partly, because it’s sometimes difficult to identify who the characters are due to the black and white line drawings. The film has been compared to Sin City; maybe what lets it down is that the French mo-cap cast are much less recognisable.

I started off enjoying Renaissance but it’s a film that well and truly outstays its welcome. The pacing is all over the place, and the introduction of an old friend from Karas’ past is an unnecessary diversion. Its trying to make interesting points about the power of multinationals and the potential misuse of science, all relevant and interesting stuff but just too confusingly presented. The film was made on a shoestring budget, developed over a number of years; you can imagine that if they had spent as long on the story as they did getting the visuals right they might have made a good film; as it is the novelty of the look wears off rapidly and then all you’re left with is an overly convoluted detective flick.

Frankly, I was so bored I started doing my accounts… One for the dvd, maybe.