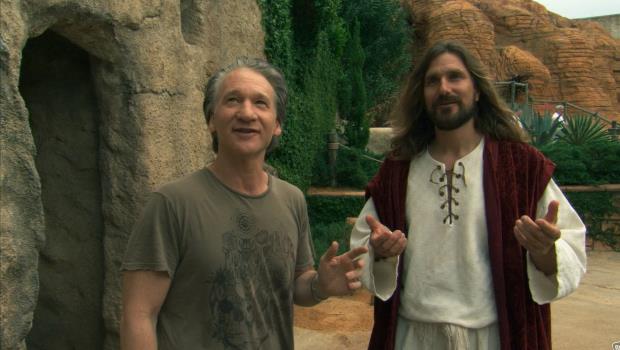 Summary: You may side with Maher, you may not, he simply lays down a case for the ridiculous side of religion, a case that is wickedly funny but serious in its comedy.

Being doubtful of religion is a natural tack for comedians: the belief placed in sacred scriptures and the miracles they tell of are easy targets for their jokes. Yet veteran American stand-up comic Bill Maher has always been a strong critic for religion, sitting on the advisory board for The Reason Project – a charity devoted to the spreading of scientific knowledge. He’s not just out to make fun of religion, he wants to really pick at the holes until the ideas fall apart. In Religulous, a title combining “religion” with “ridiculous”, Maher goes on the hunt to see if his doubt is well-founded by putting his questions to believers at holy destinations such as Jerusalem and the Vatican, as well as interviewing a range of others across America. He may choose soft targets much in the same way as Sacha Baron Cohen did with Ali G’s satirical interviews, but they reveal more than any closed-book church-goer for a hilarious introspective.

You have to give Maher credit with Religulous: poking fun at religion takes a lot of guts, especially when you so unashamedly go for the jugular. Take his interview with a man who claims to have once been gay but made a mistake and now says there is no such thing as homosexuality. Maher wastes no time in suggesting the man is still gay and drawing out comments such as people who think they are gay are “wrong”. Similarly, Maher talks to a Mark Pryor the U.S. Senator for Arkansas who has a strong faith in God, pointing out that people are putting their faith in him to run their state yet Pryor believes in Bible stories that don’t make much sense: “You don’t have to pass an I.Q. test to be a Senator” comes the retort. Oh dear.

Maher finds truckers, including a former Satanist, who have no answers to his reasoning that the Bible is wildly inaccurate, and various evangelical leaders who have no idea how to deal with a man so intent to glean the most outlandish comments from them. One of the highlights is his talk with Jose Luis de Jesus Miranda who claims to be Jeses reincarnated and wears enough bling to make Jay-Z blush thanks to generous offerings from disciples, something Maher doesn’t keep quiet about to make for hilarious, if comfortable, viewing.

With Maher’s questioning so close to the bone it’s no surprise to find Larry Charles, director of Borat, helping Maher play out guerilla filmmaking moments. At one point he gains access to Christianity theme park The Holy Land Experience in Orlando, Florida to interview an actor who portrays Jesus despite objections from the press officer who is forced to discover them already well into their dialouge. Maher and Charles’ presence at the Dome of the Rock, an Islamic shrine build on the site of the Second Jewish Temple which was destroyed in a Roman seige is equally unsuitable according to customs, yet somehow they carry it off due to a welcoming guide.

Amid all those whose views Maher loves to find conflict with, his real coup is time with Father Reginald Foster, a Catholic priest at the Vatican. He freely admist to not believing in Hell and talks of the Bible as just containing stories rather than truths: quite an eye-opener to see a 69-year-old more animated in dismissing sacred texts than defending them. His words are also a lot more effective than those Maher chats to for agreement with his view religion has too many doubts to run your life by its rules, though these do help give a little weight to Maher’s unfaltering standpoint.

Amid all the talk, Maher throws in amusing clips from films and television shows to mock those who disagree with him or cause him trouble, yet however strongly you might feel he is feeding you information for his own ends, or how much he might offend you, he certainly raises interesting points in an argument that there is something dubious about the many religions in existance. In his one misstep, Maher closes with a tirade against religion of an evangelical nature, almost forcing his views upon the audience, though perhaps this is his point. If we tell people what we think and back it up with the evidence told based on what we have seen and discovered –teachings, if you will – people looking for guidance will listen and perhaps even worship your ideals. You may side with Maher, you may not, he simply lays down a case for the ridiculous side of religion, a case that is wickedly funny but serious in its comedy.