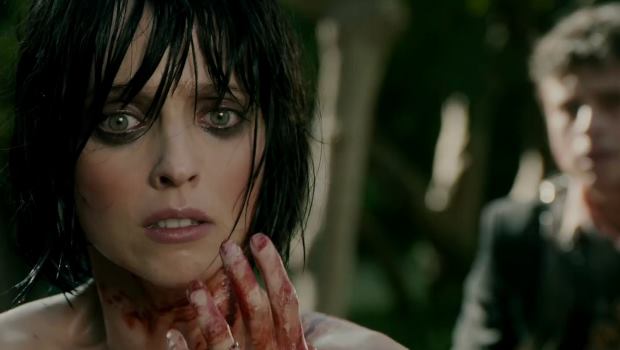 Summary: [Rec] is a great if you're after some scares, and it will definitely have you squirming in your seat.

The sudden trend of movies filmed from a cameraman’s point of view continues with [Rec], a chilling Spanish horror following a Barcelona news station’s coverage of a night at a fire station. Young and feisty reporter Angela (Velasco) and unseen cameraman Pablo are struggling for action from a sleepy fire brigade shift to interest potential viewers when an emergency call comes in seeking help for a trapped woman in an apartment block. Arriving at the scene, they find all the other tenants downstairs with two police officers and confusion over exactly what is going on. The rescue attempt ends in a crazed, flesh-eating attack from the hysterical woman and the sealing off of the building by the authorities. Yes, the zombies are at it again in a claustrophobic and genuinely taut 80 minutes of panic.

[Rec] is not as intense from start to finish as Cloverfield, nor does it have the social commentary of Diary of the Dead or the uniqueness that made The Blair Witch Project such a success nearly 10 years ago. What it does have is a superb use of the enclosed spaces of narrow apartments to replicate the spooky thrills you might get from highly-rated survival horror videogames Alone in the Dark or Silent Hill. While their movie versions failed to capture the frightening aspects of creeping around buildings where the mere suggestion of a shadow lurking up ahead would have the hairs on your neck on end, [Rec]’s perspective of the cameraman and desperate need to face the zombies head-on makes for some of the most fearful edge-of-your-seat moments for a long time.

As usual with this type of first person perspective on the action, there are moments the cameraman would surely stop filming and worry more about personal survival. It is one of those traits which will always dog this style of filming and [Rec] is as guilty as Cloverfield for pushing the limits of believability. Thankfully it does make best use of the situation at its climax when all credibility could easily have been lost with the same kind of daft and confusing major set piece seen in the JJ Abrams offering. [Rec] pitches up the tension to make the final five minutes extremely unsettling even after the shocks that have come before it.

Despite providing [Rec] with such expertly chilling moments, the three-man writing team, including directors Balaguero and Plaza, never quite manage to lift the scenes in-between beyond standard B-movie zombie fare as cops fail to impose authority, the government health inspector spectacularly messes up his job and members of the public get irrationally angry. They are all shallow stereotypical horror characters and Angela’s reporting style grates after her first few takes, but none of this matters too much. [Rec] is a great if you’re after some scares, and it will definitely have you squirming in your seat.