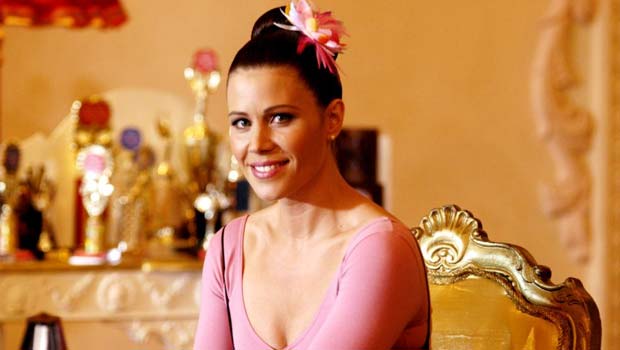 Summary: Uneven, but not unamusing...

An Australian film about dance sport? Well the last time I saw one of those it was the utterly marvellous Strictly Ballroom, which spun and pasoed its way into our hearts and could be said to have spearheaded the Australian film industry’s renaissance. So Razzle Dazzle struck no fear in my heart, yet had a lot to live up to especially when I saw that both Tara Morice and Paul Mercurio from Strictly were in it.

Dance is big in Australia. Thousands of children – mostly little girls – learn to dance and take part in eisteddfods (these are dance contests, and not eisteddfods in the classic Welsh sense). One of the schools desperate to succeed is Mr Jonathan’s, run by Mr Jonathan (Miller), a dance teacher with his own special way of doing things. Mr Jonathan believes that dance can be educational as well as entertaining, so he is delighted when a documentary crew want to film his group, the Jazzketeers, preparing for the regional heats.

Arch-rival of Mr Jonathan is Miss Elizabeth (Hall), a five-time Grand Final winner. Miss Elizabeth runs her studio with an iron fist in a iron glove, and approaches dance in a traditional, conservative way that has served her well with the judges. Her girls win the regional heats, and Mr Jonathan almost gives in to despair, but an accident to the runners up means that the Jazzketeers can compete after all, so Mr Jonathan sets about choreographing a new spectacular – a piece about the liberation of women in Afghanistan. Can Mr Jonathan’s radical approach succeed?

Razzle Dazzle explores the slightly creepy world of child dancers, pushy parents, and frustrated artists using a documentary, Christopher Guest style approach, and with mixed success. It mines the richest vein of comedy in the scenes those involving one of the girls, Tenille (Notelovitz) and her mother Justine (Armstrong) who takes the idea of pushy mother and redefines it. Justine is terrifying; clearly having failed to become a star herself all her energies are poured into Tenille’s ‘career’ – she wears a tiara to ballet class, is forbidden buttery toast, and is given private singing lessons at home by her mother as well as private dance lessons with none other than Paul Mercurio (who has not aged very well, I’m disappointed to say). When new girl Grace (Ryan) joins the Jazzketeers, Justine is horrified – Grace has already played the lead in Annie and is a direct threat to Tenille’s top dog status, and Justine’s lunacy reaches new heights.

Less successful is the Mr Jonathan storyline. Addressing the camera directly, Mr Jonathan explains that he comes from a family of anglers and is a bit of a misfit, but his character is never really given any backstory. And Ben Miller doesn’t move like a dancer. Nor do his future storylines get anywhere – chemistry between him and Paulette (Garner) isn’t resolved, though it is sweet. Miss Elizabeth, on the other hand, is completely believable and very scary. Tara Morice is given little to do as the silent costume designer (the costumes, by the way, are brilliantly awful), while Denise Roberts is very funny as Barbara, the office manager, who will only foster children with a sense of rhythm and who, on deciding that they need a boy dancer, sets about kidnapping one.

Uneven, but not unamusing…