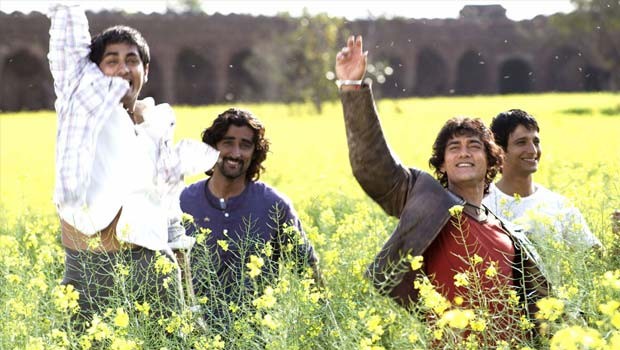 A phenomenon of sorts… would be an apt way to describe this movie. One of the most unique, touching and awe-inspiring movies to have come out of India in recent times, Rang De Basanti [Paint It Yellow] leaves an indelible mark on your psyche, and your soul.

Rang De Basanti tells the story of young Brit film-maker Sue, whom on finding her grandfather’s diary decides to make a film on it. A British officer of some of the more tumultuous periods of the Empire, it’s an authentic account of the final days of many of India’s young freedom fighters, and a story on many accounts – she feels should be told. On her arrival in India she stumbles upon a group of five friends; free-spirited and full of verve, and slowly the revolutionaries she seeks and her film begin to take form…
The problem is they can’t identify with their characters; they don’t believe in the freedom fighters they’re trying to portray, or their ideologies. This is generation next, and consumerism and hedonism rule, patriotism doesn’t even get a look in. Why would someone give up their life for their country? Especially one so corrupt, disparate, and polluted in its current state… As the students re-acquaint themselves with Indian history, we slowly witness the gradual transition from free-spirited youths without cause to something quite unexpected.

In India, the colour (Rang) of spring (Basanti) which is yellow – represents sacrifice and freedom. When someone says, “Mujhe rang de basanti” (paint me yellow) it means that person is ready to be sacrificed for a great cause. This was a pre-independence war cry used by freedom-fighters.

Rang De works on a number of levels, it takes a realistic view of issues facing the youth of India today, their indifference to the current state of affairs, politics, society and the more serious issues affecting them and youth the world over. Their attitude seems akin to: “Am I bothered?” that is until unexpected incidents cruelly rock their world.

Its’ pomp and enthusiasm take you to a certain comfort level; make you fall in love with the characters, and when things start to go awry, you’re more than willing to come along for the ride. Yet it is incredulously aesthetically astounding, the sheer fluidity of the narrative simply poetic. A hugely ambitious endeavour, it delivers with thundering aplomb.

Mehra’s movie beautifully intersperses present day happenings with scenes of pre-independence struggle, intercut with fluidity and élan. Much of this can be attributed to the lush cinematography (Binod Pradhan) and the editing (P S Bharathi) which fluently merges past and present, marrying them deftly to take the film to another level. The director has been clever to use the leads as both the dis-affected youth and the legendary revolutionaries in the flashback sequences. The screenplay is taut, clever and consistent; the wordplay more so. Special mention to the beautifully crafted script by Kamlesh Pandey, Rensil D’Silva, Prasoon Joshi and Mehra.

Though the climax is a tad incredulous, it makes you realise the director knows his craft, and knows it well. Its sheer audacity ensures this, and enhances the impact of his vision. It sends you reeling, and whilst the director has held your hand and guided you through the movie, here he seems to have spun you around and disappeared without trace leaving you to simply get thinking, and it echoes: Stop cribbing, start acting.

He has achieved a rare feat of making socially relevant ideologies contemporary, interesting and enjoyable. The film doesn’t preach, it’s not jingoistic or whiney, it just makes you reflect, want to talk, and possibly even act… It shows the difference between past years freedom fighters, and the ways in which people can make an active difference today – we may have the solutions to problems, but before acting upon them first we have to acknowledge that we are part of it. Our lackadaisical attitude about most things means we’re always the first to criticize, yet always the last in stepping forward to improve the situation.

A film within a film, a social and political parable, a snapshot of the youth of today; their simmering discontent slowly turning to indifference, and the prevailing moral degeneration of the nation. It’s bold, ambitious, subtle yet downright fervent as the protagonists hurtle towards their final act, with the same infectious passion and laughter we have become accustomed to. As serious as it all sounds, this is one of the most entertaining and fun movies to come out of India in recent years.

The performances are fantastic, and as an ensemble they compliment each other beautifully. Khan continues his march for path-breaking movies and quality cinema, whilst debutante Patten (daughter of Chris..) is aptly contemplative and excited as Sue. It’d be easy to mistake this for a patriotic movie, it’s not. More a tale of humanity, morality, and taking a stand rather than being part of the silent majority. Its audacious spirit becomes its beauty. “A Generation Awakens” – It surely does.