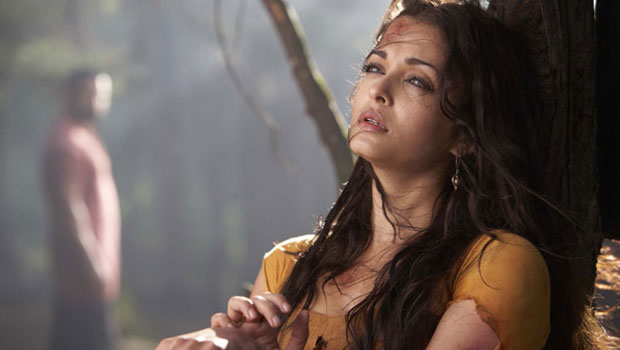 Summary: Controversial in some aspects (the God factor) but nevertheless something great for the makers to get their auteur teeth stuck into.

Fantastical tales of mythology, scripture and religion have often been great material on which to base cinematic spectacle. From the good (The Passion, Apocalypto, 300) to the not so great (Troy, Clash of the Titans) and with more in the pipeline including the eponymous ‘Genesis’ it will be interesting to see how audiences take to tales of lore; simply as great popcorn-fodder or some real food for thought.

Raavan is interesting as it takes the perspective of the antagonist; probably the most interesting character from Hinduism’s great Indian epic – The Ramayana. India’s Spielberg Mani Ratnam directs this modern day adaptation of the Ramayana in which the wife of lord Rama, Sita was abducted by the demon king of (Sri) Lanka, Ravana. It’s not as simple as that as dynastic intrigue, war over empires and test of faith as are also part of the narrative, but this seems more of a rustic take.

In this incarnation we see Dev (Vikram), a policeman, fall in love with Ragini (Rai Bachchan) a classical dancer. They get married and he takes her to his new posting in Lal Maati, a small feudal town in northern India. Here a local tribal outlaw Beera (Abhishek Bachchan) has over the years shifted the power from the ruling gentry to the have-nots of the area. To stamp his authority on the area Dev plans some Machiavellian machinations which rip open Beera’s world, and set in motion a violent and dramatic chain of events which will claim lives, and change destinies.

Beera, injured but enraged hits back, starting a battle that draws Dev, Beera and Ragini into his world (of the jungle) his laws, and his terrain. What transpires is a journey that tests their own truths, beliefs and emotions. When the lines dividing good and evil start to blur, whose side does one take? It puts Ragini in the predicament of when hate turns to love and good starts looking evil, which side are you on…

A legendary villain if ever there was one, the 10-headed Ravana is the ultimate bad-ass, a crazy mutha that Lucifer would be proud of. In terms of premise, here we seem to get up close and personal with the captive and captor looking intricately at the fear, loathing, anger, frustration, passion that ensues between the two personalities. Controversial in some aspects (the God factor) but nevertheless something great for the makers to get their auteur teeth stuck into.

Ratnam is a legend and I have waxed eloquent about him before, hence wont repeat myself. But he is 100% the reason you should go see this movie as he has vision like no other. There is also the sumptuous Africa-inspired soundtrack by A R Rahman, and eye-candy in the form of Oprah-endorsed star pair Aishwarya and Abhishek. By all means the promo’s look intriguing, and we can’t wait!