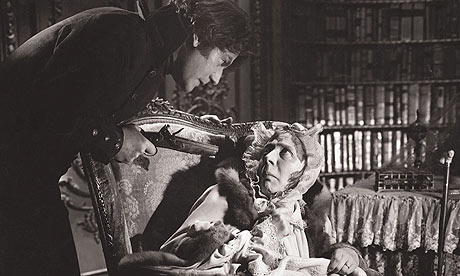 St Petersburg, 1806, and gambling fever has gripped the nation. Aristocratic army officers regularly stake a year’s income on a turn of the cards. Captain Herman Suvorin (Walbrook) is a lowly engineer; obsessed with making his fortune and racked with jealousy of his wealthier comrades, his peculiar manner has won him few friends amongst the riotous troops. His obsession leads him to the legend of a Countess (Evans) who, desperate to conceal her gambling debts and numerous affairs from her jealous husband, sold her soul to the devil in exchange for the secret of success at the most popular game of the day, faro. But the legend is just that – only a legend…

But then he stumbles across a rare book which seems to confirm the story, puts two and two together, and realises the Countess, now very old, is still alive and living in St Petersburg. Determined to discover the secret for himself, he worms his way into the household by seducing the old lady’s lonely companion Lizaveta (Mitchell), with letters copied from a book of etiquette. Once in, Suvorin discovers a secret door that leads directly from the street to the Countess’ bedroom, and while Lizaveta and her employer attend a ball, he enters the palace and waits in the shadows for the Countess to return…

The Queen of Spades is a fine film in its own right but it also has an interesting back story, having not been seen in British cinemas since its original release in 1949, and now getting a rerelease supported by, among others, Martin Scorcese who has recorded a special introduction to the film. A Gothic thriller, it has much in common with Thorold Dickinson’s Gaslight (which spawned the Hollywood remake starring Ingrid Bergman). It’s beautifully lit and photographed, capturing the decadence of old St Petersburg before the Napoleonic Wars, and creates a wonderful atmosphere of tension in its depiction of a Faustian pact.

There is some mystery about Captain Suvorin, yet initially the audience may even sympathise with his desperation to keep up with the Jones’, surrounded as he is by young men to whom money is nothing. But our sympathies are soon tested by his cold blooded pursuit of poor lonely Lizaveta, too naïve to see through his hollow words, and desperate for any kindness or sympathy. The Countess, once so beautiful and charming, is now a tyrannical old despot, keeping Lizaveta at her beck and call 24 hours a day. No one does imperious like Edith ‘A Handbag?!’ Evans and here she is marvellous as the bitter old woman who sold her soul for temporary salvation.

Queen of Spades is the perfect antidote to the horrors of the sales, a splendid entertainment, and a bit of cinematic history all rolled into one.