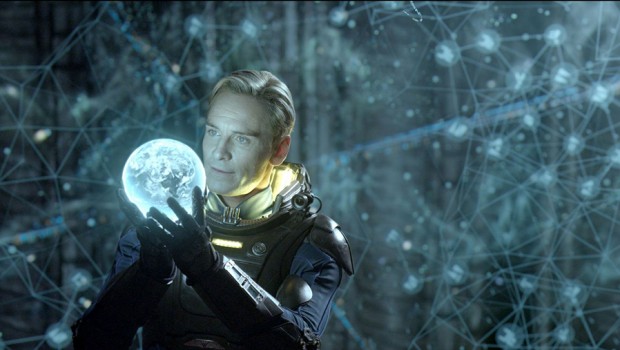 Summary: Prometheus didn’t completely answer all the far-reaching questions it alludes to, far from it, but was still a damn enjoyable watch!

Prometheus takes us to the land (hypothetically speaking) of Arthur C Clarke, Carl Sagan, Isaac Asimov, how could I forget Erich Von Daniken… and the director’s very own early ventures into ‘Alien’ territory. Science fiction, the start and end for some; a bit of an enigma to others. Its draw though can’t be denied, as we explore the omnipresent question – is there a higher power?

The movie starts off with the crew of the ship Prometheus in hypersleep, as they hurtle towards their target – a humanly inhabitable planet in a galaxy light years (and just over two earth years) away. The droid quietly overseeing the flight is David (Fassbender). Learned, intuitive, nuanced in human nature, think artificial intelligence on steroids and you’re nearly there.

As the crew awake from their slumber, they’re greeted to a presentation from the emotionally retarded Meredith Vickers (Theron) and the recently departed CEO of Weyland Corp (Pearce) via a hologram, introducing the mission. But what has brought them here via two years in stasis… Ancient maps and drawings from ancient tribes and cultures originating from earth, all parts of it, over the ages. But the key instigators here are paleo-archaeologists Elizabeth Shaw (Rapace) and Charlie Holloway (Marshall-Green) seeking the origins of humanity itself, and our creator.

Soon enough we land on the moon LV-223, and with it discover huge unnatural structures, and then the fun commences…

Prometheus takes Scott back to a long-ago conquered vista (via Blade Runner, Alien) and lets him play with these elements with a deft and assured hand. But the graph is so very different from the chill factor and thrills of Alien or the retro futurist noir of Blade Runner. Though these were genre-defying, this is still grittier, understated and – in my eyes – more meaningful. A dark neuro-thriller with pace, depth and context, albeit flawed for many.

It is action all the way, no dragged out relationships or real time for character development. I’d say that’s not necessarily a bad thing (unless you’re missing Ripley) but then also no real empathy for the crew; at least not for anyone other than Rapace’s Shaw. The cast is apt for their roles; most are stereotypes, but some (Rapace, Fassbender) rise above and leave an impact of sorts. The latter’s dark undertones are a tad disturbing, there’s a feeling of haven’t we seen this before, but forgiven as it’s so brilliantly played.

Visually this is stunning, beautifully photographed with breathtaking landscapes meshed with a H R Giger-esque fantasy-scape. Once you get inside the newly found developments and delve a little further, the detail and enormity of it all can be somewhat overwhelming. Honestly, it’s like a fanboy’s wet dream – especially when the star maps activate; it’s stylish and oh so pretty.

Scott steadily ramps up the tension, with some predictable twists and turns, but he keeps it interesting and the viewer on edge. He also explores theological and cosmological themes, as well as the whole Man vs. God complex. He also seems to allude to the theory, like most science fiction writers and Dr Hawking, that if we were ever to encounter an alien race, we may not be the better for it. The earlier Aliens were horror-fests that I enjoyed, but more blips on the radar for me personally. Prometheus didn’t completely answer all the far-reaching questions it alludes to, far from it, but was still a damn enjoyable watch!