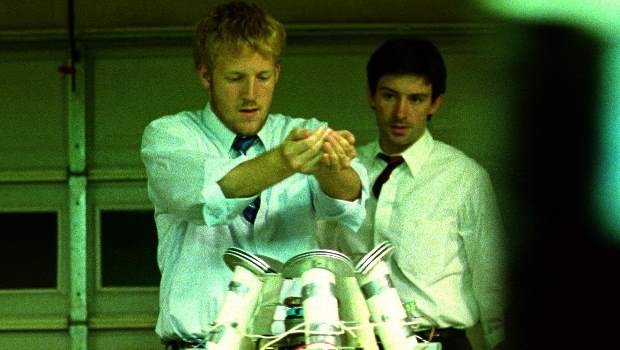 Summary: Carruth directs with great invention, setting up some interesting shots, and providing some excellent dialogue.

Even if this film wasn’t incredibly inventive and astutely made, Shane Carruth would deserve considerable critical plaudits for making it on a budget of $7,000, and for taking on the roles of scriptwriter, director, lead actor, producer, editor, cinematographer, and sound man, and for writing the music and being responsible for the casting. That Carruth has delivered a film that belies it incredibly low budget, and a film that is philosophically complex without alienating the casual viewer, means that his career could very well be one to watch in the future.

‘Primer’ follows a group of white-collar science workers who, in their spare time, are attempting to make scientific breakthroughs that they can then patent and make their fortune. Aaron (Carruth), purely by accident, discovers an anomaly in his latest invention that appears to lose him a period of six hours. Having stumbled across a self-regulating energy field that acts as a contained time machine, Aaron and his best friend Abe (David Sullivan) decide to keep their discovery from the others. Expanding their ideas, Aaron and Abe construct a larger machine on an industrial estate, large enough to project both of them six hours into the future, and bring them back afterwards. Naturally, and realistically, their first thought is how they can turn this discovery to their own benefit – manipulating the stock markets, in other words.

As they become more paranoid and possessive about their invention, Abe and Aaron find themselves exhausted and confused about what they are experiencing. From living 36-hour days to attempting to avoid crossing paths with the ‘real time’ versions of themselves, their experiment seems to be spiralling out of control, especially when they realise Aaron’s father-in-law has apparently stumbled across the implications of what they are doing. This paranoia eventually pushes them apart and sets them against each other when it becomes clear that both men have been operating against the other from the beginning, and trying to cover their increasingly complex temporal tracks.

Although obviously made on a microbudget, Carruth directs with great invention, setting up some interesting shots, and providing some excellent dialogue (“Are you hungry? I haven’t eaten since later this afternoon.”) The scientific jargon appears confident and doesn’t overload the script, although I’ll have to take the physics on trust as the subject is completely beyond me. The film provides immense fuel for speculation, and makes it uncomfortably clear that if a scientific breakthrough like time travel is possible, then it will happen in strange, stumbling increments like this, and that the most troubling scientific advances tend to be made by two guys in their shirt sleeves working in their garage after hours. It’s a sobering thought that someone could be working right now on a project in his spare room, that could either be for the benefit of all mankind, or that could destroy us completely.