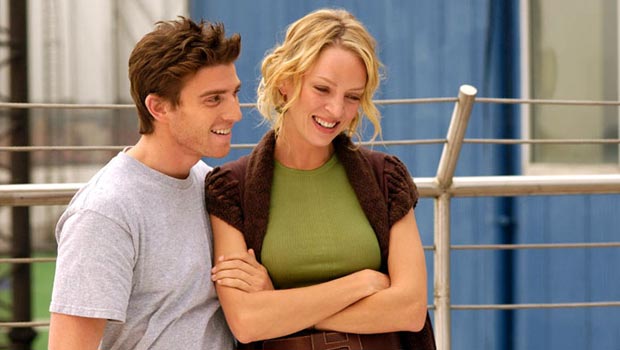 Summary: While perhaps not adding anything much to the genre, Younger reveals himself as a talented writer.

Written and directed by Ben Younger – and owing a large debt to Annie Hall-era Woody Allen – this romantic comedy explores whether an age gap is any barrier to love and relationships.

When 37-year-old photographer Rafi (Uma Thurman) meets 23-year-old painter David (Bryan Greenberg), their tentative romance seems to survive the fourteen-year difference between them. Getting over a messy divorce, Rafi confides in her therapist Lisa (Meryl Streep) about the joys her new man is bringing her. But when Lisa starts to piece together the facts, she realises that this new man in Rafi’s life is none other than her own son. Struggling with her over-protective Jewish mothering instincts and her professionalism as a therapist, Lisa forces herself not to intervene. Eventually accepting Rafi into the family, it turns out the true barrier to love is not family, or age, or even circumstances, but just plain human nature.

On the surface Younger’s film seems quite tender and perhaps emotionally slight, but certainly by the conclusion it has revealed itself as being surprisingly hard-hearted and realistic about the way people relate to each other, and the way romantic relationships really work. The point at which you would expect the Hollywood ending to kick in is subverted by a fairly barbed and honest epilogue, one that underlines, rather than detracts from, the relationship between the two main characters in a way that is really quite moving.

The main difficulty with the film is that we get no real sense of the age gap between Rafi and David, partly because Thurman looks a decade younger than her character’s 37 years, and partly because her chemistry with Greenberg doesn’t quite take off. Both actors are very likeable in their parts and give good performances, although they are totally upstaged by Streep, who is excellent.

While perhaps not adding anything much to the genre, Younger reveals himself as a talented writer, overwhelmingly interested in characters and the ways they relate to each other, and as a director he has a good eye for New York as a city where people actually live and work, and not just as a series of picture postcard images.