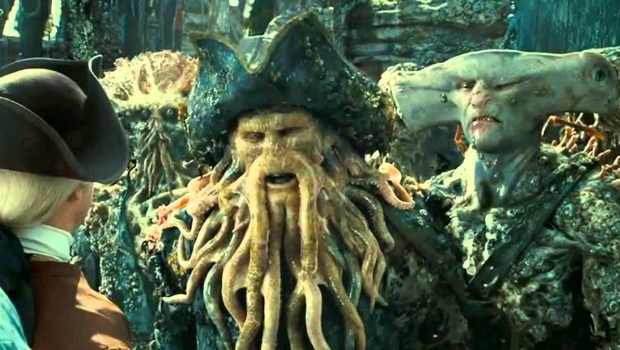 Pirates of the Caribbean: At World’s End Review

Summary: Not great. But good. Drink up, me hearties, yo ho.

The trilogy limps into harbour with a bloated finale that nevertheless has occasional moments of brilliance.

Well, if you saw Pirates of the Caribbean: Dead Man’s Chest, you’ll remember… actually, I’m not sure what you’ll remember, if, like me, you struggled to stay awake for most of its overwrought three hour running time. The characters were on a quest, but never really seemed sure what the quest was for: Captain Jack Sparrow (Depp) was avoiding arrest, but also seeking a key – I think; pretty but dull Will (Bloom) was looking for his dad; beautiful but boring Elizabeth (Knightley) was looking for Will; Tom Hollander’s puffed up petty tyrant was looking, fittingly, to rule the waves on behalf of the East India Company, which involved finding Davy Jones. This last was what made least sense – was it Davy (Nighy) himself, or his heart, or a chest, or the key to the chest, that they really wanted? Anyway, after a lot of rolling, at the end of the film Jack gets swallowed up by a giant ball of phlegm, and Will decides that they ought to save him. And that’s where we come in, in medias res.

The story is – oh there isn’t one. Elizabeth is now a fully fledged pirate, and she and the newly alive Captain Barbossa (Rush) go to China, ostensibly to enlist the aid of Chow Yun Fat’s… but in fact to procure some cheap outfits for Keira, who wears variations on the cheong-sam for the rest of the film, like a high-class whore or surrendered wife (in the final scene she has acquired an eighteen century version of this season’s maxi-dress). They also get from Chow a jigsaw like map which shows them the way to the end of the world. Where Jack is, happily spending time with the person he likes best in the world and a load of pebble crabs.

Anyway, they get Jack back and then there’s a load of stuff about the East India Company trying to rid the world of pirates – the film opens with a group hanging – which entails some sort of pirate council coming together to decide how best to defend its way of life. Which seems weird on a number of levels: 1) these are not noble freedom fighters, they’re *pirates* – murderous, thieving rogues, who live by the motto ‘take what you can, give nothing back’, less romantic in practise than in theory; 2) would pirates even have a council? It seems the complete antithesis of everything they stand for. Elizabeth and Will have (dull) trust issues, and there’s more crossing and double-crossing and wheeler-dealing than you can shake a stick at, and something about a goddess, Calypso (Harris), and its all left nice and open ended for a possible part four.

If you can make sense of it, you’re a smarter person than I am. But that’s not to say that its completely awful. Johnny Depp could sit in a box doing nothing and still be charismatic; the fight scenes, and some of the big set pieces, are impressive. Geoffrey Rush lights up the screen with some fabulous scenery chewing. But it all just lacks the subtlety and lightness of touch of the first Pirates film which took the world by surprise. And I’m not some Pirates hater – I own the first film on dvd.

But hey, my sixteen-year old nephew liked it. Mind you, he said it was good. Not great. But good. Drink up, me hearties, yo ho.