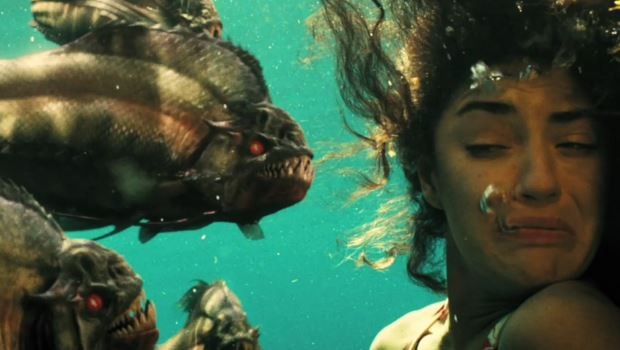 Summary: Take a look at the Piranha 3D poster or watch the trailer online. You’ll know by the end if you want to see it and if you do, then you’ll have a blast.

British model Kelly Brook has been appearing in various states of undress everywhere she can to promote her new film Piranha 3D in which she plays a pornstar filming on a lake where hundreds of scantily clad youngsters are romping their way through their spring break until flesh-eating piranhas take a liking to human flesh. In 3D. If that makes you think you hope to see lots of nubile young girls flashing their boobs and even more of them gruesomely eaten alive while the local authorities try to think of a way to save them, then Piranha 3D is bang on the money – and unashamedly so. Director Alexandre Aja is known for giving us nasty horror movies, but this is pure summer popcorn fare that, while about as tasteful as a lads mag and unlikely to test your brain, is hugely entertaining and completely disposable.

Taking inspiration from Joe Dante’s Piranha which in turn took its basic premise from Steven Spielberg’s Jaws, there’s very little that needs explaining in terms of story. A tremor under the surface of Lake Victoria unleashes scores of prehistoric piranhas to feast on the local town’s swimmers – who just happen to have multiplied by the fact it’s Spring Beak and no chance of making the teenagers do what their told. Faced with the issue dealing with the fish is the local sheriff Julie (Shue) who is struggling to control her own son Jake (McQueen) who takes a day job as a location scout for porn director Derek (O’Connell) rather than babysitting his siblings, leaving them at home. Of course, they all end up on the lake in various places much to the delight of the piranhas who spend 80 minutes eating everyone they can with close ups of them chomping into arms, legs, eyeballs and just about every other body part while others are hauled out of the water with sickening injuries or half their body gone.

When Aja isn’t focused on the fish, he leaves Julie to do the necessary background check on how the piranha’s came to be including an appearance of Christopher Lloyd reprising his Back to the Future crazy scientist role. Meanwhile Jack joins porn stars Danni (Brook) and Crystal (real-life adult movie star Riley Steele) on the lake with a friend unexpectedly in toe where Aja firmly concentrates on giving Brook and Steele their change to flaunt their bodies in 3D as they kiss and swim naked together. Taken in the context of the film, the trashy nature is easily to enjoy given at no point does Piranha 3D ever attempt to be a serious film. The shots of the Spring Break could have been lifted from any MTV beach party but Aja shows remarkable inventiveness in finding ways for the victims to get chomped. The 3D itself looks fine, though you hardly realise its effects after 15 minutes.

Deciding how to grade Piranha 3D, some would say it’s all very silly and we should know better: Daily Mail readers and those with a low tolerance for gore and nudity are bound to be upset by its very existence though they are missing the point the whole film is shot for laughs. The fact it’s acted out without any knowing in jokes save for Richard Dreyfuss of Jaws fame making an appearance in the opening sequence, only serves to up its ante against the glut of self-referential horror movies we’ve been dished up over the years. Take a look at the Piranha 3D poster or watch the trailer online. You’ll know by the end if you want to see it and if you do, then you’ll have a blast.