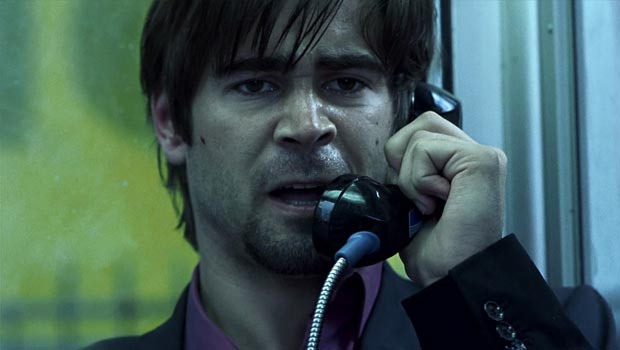 Summary: ‘Phone Booth’ cannot exceed the limitations it has set itself.

‘Phone Booth’ stems from an interesting concept that has been admirably executed by a more than competent director. It is also a muted, frustrating and surprisingly short film, which raises that old pencil-related question: what’s the bloody point?

The irrepressible Colin Farrell plays Stu Shepard, an arrogant, vaguely seedy Manhattan media consultant, all flash suits and smooth patter, who answers a ringing phone and proceeds to engage in a verbal cat and mouse game with a mysterious assailant/sniper who threatens to pop a cap in his ass if he hangs up. Just to prove he has a salient point, said mysterious assailant blows a small hole in an on-looker’s chest, and all hell breaks loose. Stu slowly begins to lose his mind and body fluids in equal measure, and then to make matters worse, his wife turns up. And the guy in the sky with the very sharp eye can see it all unfurl before him.

Farrell puts in an engaging performance as a man who finds his every word and action controlled by someone he cannot see and does not know. He is ably supported by the always-excellent Forest Whitaker as the de rigeur black cop who quickly begins to understand the nature of Stu’s dilemma. The script is quick and snappy, allowing the story (what there is of it) to zip along at a fair old pace. A little twist at the end of the tale will keep celebrity-cameo aficionados happy as Larry when the identity of Farrell’s nemesis is finally revealed (although anyone with a cursory knowledge of film and television will know who the baddie is from the voice alone. Unless of course you watch the film late at night a little bit drunk. Ahem). The film even manages to throw in a few topical messages about how a huge increase in the availability of communication devices has enabled people to spend more of their daily lives lying – poor Stu’s penchant for porkies being the main reason why he is targeted in the first place.

Yet even with all this, ‘Phone Booth’ cannot exceed the limitations it has set itself. Admittedly, shooting the majority of it in a phone booth means that at least this is film with an idea at its core, (and there sure ain’t many of those around these days) but at the end of the day it is still a film shot in a rectangular box. Schumacher does his best to spruce up proceedings with clever digital trickery here and there, but the fact remains that when an audience watches a film, they place themselves directly into the centre of the action. And why would anyone want to be cooped up in a phone booth for over an hour, listening to the trials and tribulations of a man whose so-called crimes are not bad enough to be interesting (hold the front page! – there’s someone in the media who’s planning to sleep with one of clients!) and whose redemption is therefore hardly more than lukewarm?

Considering how boring this film could have been, Schumacher and Farrell should be applauded for holding onto even a limited level of audience interest. ‘Phone Booth’ may even for some have the makings of a taut psychological thriller. But for others, it is more a case of asking why a self-respecting avenging psycho serial-killer would pick on anyone as undeserving as Stu Sheperd as the target of his self-righteously moralising ire, and why the lazy bastard couldn’t at least have kept Hollywood newest star moving around a little bit whilst he messed with his head.