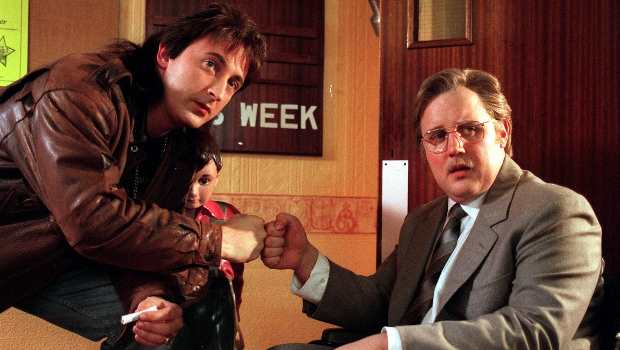 Summary: It's not immediately apparent to me why this show isn't as enjoyable as Phoenix Nights; it is very similar in a lot of ways.

It sometimes seems as if Peter Kay is a victim of his own success. In recent years he has been responsible for creating some of the funniest characters on British television for a long time, yet the repetition of his material by every Tom, Dick and Auntie Barbara somehow devalues this. Well, it does for some of us anyway. Most of you are probably rounded enough human beings to simple enjoy what you enjoy without double-guessing yourself ’til kingdom come.

As well as being funny, Peter Kay (or at least his management) also seems to be a fairly shrewd businessman as, just in time for Christmas, he has re-released some of his DVDs: the Phoenix Nights Box Set (i.e. series one and two of the Channel 4 show that shot him to fame), along with another double disc set containing both its spin-off show, Max and Paddy’s Road to Nowhere, and its own spin off, The Power of Two.

Let’s start with Phoenix Nights. I was a huge fan of the show and used to own both series before someone with light fingers and a crow bar decided to visit my flat when I was out. For some reason, I have never got round to replacing them and if truth be told, I had forgotten just how amusing the misadventures of Brian Potter, owner of a Bolton working men’s club, and his staff members were. It’s difficult to pick out a single funniest moment, but it’s hard to beat compere Gerry St Clair’s comment upon seeing how much the patrons of the Phoenix Club are enjoying using the newly installed bucking bronco. “I haven’t seen them this excited since they printed that paedophiles address in the paper”.

Actually, now, I’m thinking about it, maybe my favourite bit is when Brian Potter, who is confined to a wheelchair after an accident with a fruit machine, is trapped on his stair lift during a power cut. In a bid to escape from the tricky situation he urges himself to, “think, what would Thora Hird do”.

Or maybe the bit where… You get the point. It’s funny. There are lots of funny bits. There isn’t a bad episode in either series.

Phoenix Nights ended with club bouncers Max and Paddy heading off in a motor home under the mistaken belief that they are the target of a professional hitman, and Road to Nowhere picks up the story of how they fair on their travels.

It’s not immediately apparent to me why this show isn’t as enjoyable as Phoenix Nights; it is very similar in a lot of ways. There’s obviously a change in cast, but I think probably more significant is the change in the writing team behind the show. I’ve now idea exactly how the duties were divided up but Neil Fitzmaurice, who played Ray Von, and Dave Spikey, who played Gerry St Clair, are credited as the co-writers of Phoenix Nights.

Road to Nowhere, on the other hand, is the work of Peter Kay and Patrick McGuinness, his childhood friend who stars as Paddy and who had little acting experience before Phoenix Nights. Perhaps the part played by Fitzmaurice, an experienced comic actor, and Spikey, a seasoned stand-up comedian, in making Phoenix Nights such a success has been overlooked due to Kay’s greater celebrity.

As for the Power of Two, Max and Paddy’s fitness video… Well, do you really think a DVD that mixes comedy and exercise is really going to be worth watching for an hour? A sketch, or a couple of scenes in a sitcom maybe, but a whole hour?

If you’re just off to do your Christmas shopping, Phoenix Nights is likely to make someone very happy, whereas the Max and Paddy Road to Nowhere/Power of Two collection is only for the serious Peter Kay enthusiast. If you’re looking for another Kay-related DVD, go for his first Channel 4 show, That Peter Kay Thing. This features 7 self-contained mocumentaries filled with brilliant creations like Leonard, an OAP paper boy and evangelical Christian, and the first appearance of Keith Lard, the overzealous fire safety officer who allegedly “interferes with dogs” in his spare time.