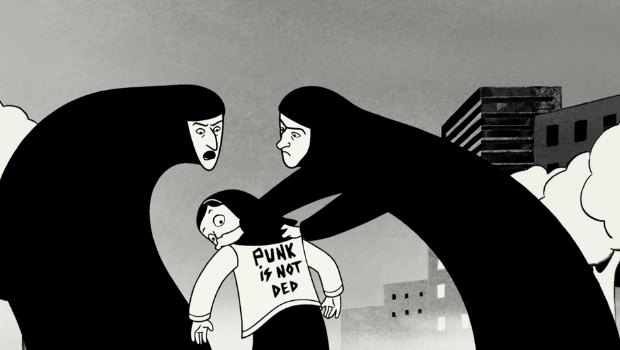 Summary: The simple, monochrome animation is surprisingly effective and recalls the graphic novel while still bringing something new to the story.

It’s been a rocking good year for independent films and Persepolis is another one to add to the list.

Marjane (Mastroianni) is a bolshy, intelligent child, obsessed with Bruce Lee, growing up in comfortable affluence in 1970s Tehran. Her family, intellectual and westernised, are opposed to the Shah’s decadent despotism, and initially are delighted when the Islamic Revolution occurs and the Shah is overthrown. At last Iran can be a free state.

The people’s hopes are rapidly dashed as the fundamentalists take power. Soon the schools are filled with veiled women teaching jihadist propaganda and thousands of people are arrested and executed, including Marjane’s uncle (Iggy Pop), a communist. Marjane’s family, like most people, are anxious to avoid attention and fly beneath the radar, but Marjane, clever and fearless, enjoys defying the ‘social guardians’, listening to Western music and winding up her teachers. Nonetheless, as Iran goes to war with Iraq, and bombs rain down on Tehran, fear permeates their daily lives.

Marjane pushes the boundaries once too often and her parents, fearing for her safety, decide to send her to Austria, where they think she will be safe, in the home of her mother’s best friend. However, the friend proves useless, and the fourteen year old Marjane finds herself alone and vulnerable, and going through adolescence at the same time. She eventually makes friends, and even finds love, but after leaving high school she ends up sleeping rough and nearly dies.

Finally she comes to her senses and returns to Iran, but doesn’t feel that she belongs their either, and enters a period of deep depression that only ends when she goes to art school. After a brief, failed marriage, she realises that though she is Iranian to the core, she cannot live in Iran, and makes the heartbreaking decision to leave…

Based on her own graphic novel, Marjane Satrapi and Vincent Paronnaud’s film is a masterly work. A film about growing up during the fundamentalist revolution in Iran sounds like a total downer but in fact the film is anything but. Of course it has tragic and horrifying moments but manages, like Marjane herself, to see the funny side. There is Majane’s eccentric grandmother (Rowlands), who keeps her breasts firm by dipping them in ice-cold water for ten minutes every day. There are the various moving and hilarious sequences where Marjane and her friends defy the fundamentalists, playing air guitar along to Iron Maiden, and Marjane’s first encounters with the opposite sex in Vienna. Above all, there’s the way in which Iranians tried to maintain a veneer of normality – still holding house parties, with home made wine and decadent music.

The simple, monochrome animation is surprisingly effective and recalls the graphic novel while still bringing something new to the story. The history of Iran – good old Britain, always meddling – is simply explained, and the ridiculous nature of the Islamic Revolution is pointed out – anatomy and life drawing classes where the model is, basically, wearing a tent – but the human side of Marjane’s fictionalised story is never forgotten. She is a lively and charming heroine – calling a bunch of Austrian nuns prostitutes; marching into art school singing ‘The Eye of the Tiger’ at full volume and off key; terrified that she will never see her parents again. Unmissable.