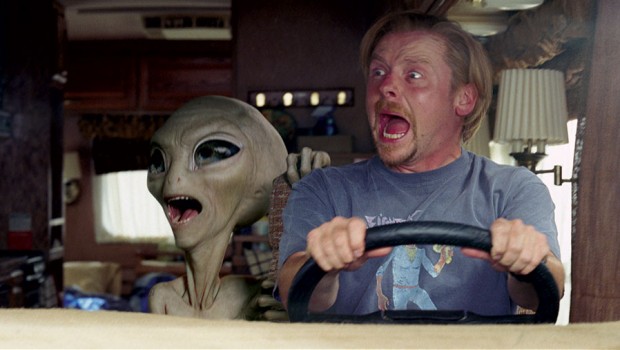 Summary: Pegg and Frost's third feature together fails to make the same impact as their acclaimed British-based fare.

Shaun of the Dead and Hot Fuzz alerted Hollywood to the comic talents of the Simon Pegg and Nick Frost double act, however their third feature together fails to make the same impact as their acclaimed British-based fare. Moving over to the States they lost regular director Edgar Wright to his own projects such as the successful Scott Pilgrim vs The World which landed him in the midst of America’s comic book fetish. Pegg and Frost found a good replacement in Superbad’s Greg Mottola, but the spark between the pair is lost as they try to lampoon sci-fi by repeating lines and recreating scenes from its most famous films.

Pegg is Graeme Willy, a sci-fi geek who illustrates the comics of long-time buddy and fellow geek Clive Gollings (Owen). They’re travelling across America for the first time taking in the conventions where they can meet their heroes and explore the fantasy worlds they love to watch and read about. They get the autograph of their favourite author, marvel at the landscape and get treated like a gay couple by the locals – leading to laboured jokes with slightly racist undertones. Its not clear whether they’re suggesting Americans think all pairs of males on tour through their country are gay or that’s the impression Brits give off, but either way it’s unfunny as the tired innuendo.

The film gets a breathe of fresh air when Graeme and Clive stumble across an English-speaking alien called Paul (voiced by Seth Rogen) who is trying to evade the authorities and get back home. Rogen has a field day with the animated character who smokes, drinks and generally pokes fun at his new-found earthling friends. His take on the pair is amusing, and the introduction of Jason Bateman’s Agent Zoil on the hunt for Paul and Sigourney Weaver in badass mode as baddie The Big Guy ensure there are laughs from the stiff Fox Mulder-style FBI agent and Weaver as a dastardly bitch (get it?), however much of the other in-joking is disappointing.

Pegg and Frost shoehorn in so many one-liners taken from other movies they’re like embarrassing uncles at a wedding who have bet they can add a sci-fi twist to every conversation while the aping of famous scenes merely diverts from the main action. It hots up at the end until the forgone conclusion of a final shot but the most lively performance comes from the wisecracking Rogen as Paul – and he’s animated.

EXTRAS
Extended feature, commentary with Greg Mottola, Simon Pegg and Nick Frost, bloopers, The Evolution of Paul feature, Simon Silly Faces, galleries, the Making of Paul and Who the hell is Adam Shadowchild?