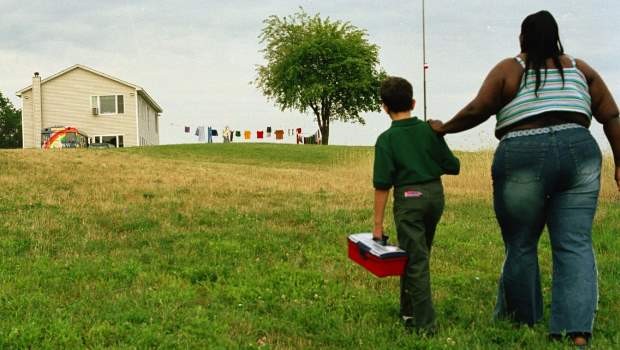 Summary: In the end, there is little in Palindromes to enjoy, and much that will piss off a wide variety of people with a number of opposing views.

To begin: a word of warning. Those of you familiar with the previous work of Todd Solondz, will know that he is not the most ‘vanilla’ of directors. Not afraid to stoke controversy, he deals with highly sensitive issues and comes at them in an often unexpected and, to some, morally dubious way.

Those who have previously rejoiced in Solondz’s uncompromisingly misanthropic world-view will not be disappointed by his latest effort. However, the idea that a majority of unsuspecting Palindrome audience members won’t in some way be offended by what they see, is as about as likely as Jose Mourinho painting his downstairs toilet a nice red.

In fact, even Palindromes’ synopsis will be relatively unpalatable to some. Aviva (a name which the crossword puzzle nerds amongst you will have already noticed is itself a palindrome) is a thirteen-year-old girl from a nice liberal Jewish American family. Like most girls, Aviva harbours considerable maternal instincts. Unlike a lot of other nice girls, however, Aviva is determined to act on these instincts – something she has a chance to do when she visits another nice Jewish family and spends time with Judah, their amusingly obnoxious teenage son.

Aviva, to her parent’s horror, falls pregnant. Repelled by the idea that she keep the product of the stolen couple of seconds she shared with young Judah, they insist she has an abortion. After the operation, and determined to still have a child, Aviva runs away from home. She briefly hooks up with ‘Bob’ (real name Earl) a paedophile truck driver, then finds herself taken into the bosom of a fundamentalist Christian family comprised of a bunch of handicapped kids, headed by the kindly, but quite mad, Mama Sunshine.

The Sunshine troupe has breakfast together, perform boy-bandesque ditties to Jesus, have taken the ‘recently-saved’ Earl under their wing… and have a nice line in abortion doctor assassinations. They send Earl off to kill the doctor who performed Aviva’s abortion, and she tags along for the ride. The killing goes wrong, the police catch Earl, and Aviva ends up back with her family – but still determined to have that child.

So, to recap, Palindromes deals with teenage pregnancy and abortion, adolescent sexuality, paedophilia, disability, and Christian fundamentalism: this film is clearly going to go down well with Middle America. But the fact that Solondz covers these ‘issues’ is not within itself hugely controversial – it is the judgements (or lack of) that he makes on them, which may well put peoples’ backs up.

Solondz does not praise Aviva’s determination to have a child at a socially unacceptable age, but neither does he present teen pregnancy as a particularly bad idea. Mama Sunshine and her family are shown to be loving and caring but also devoutly Christian people – so much so that they are prepared to kill those who act against their pro-life religious views. But Solondz does not make much of an effort to condemn the killing of abortion doctors. And Earl, although a paedophile, surely society’s most feared and hated ‘deviant’, is portrayed as an amusing, bumbling simpleton, involved in a relationship with Aviva that she seems to be as much in control of as he is.

In an age where people go to the cinema expected to see the validity of their ideals and opinions reflected back at them in neat little packages, some audiences might find Solondz’s refusal to meet this expectation refreshing. Others will find it plain horrifying.

Solondz destabilise his audience further, by employing the services of two women, four girls (13-14 years old), one 12-year-old boy, and one six-year old girl to play Aviva at different stages of his film. This device gives his film its own ‘palindromic’ structure and, it could be argued, allows Solondz to explore through Palindromes the nature of character and personality. Then again, it might just be a tricksy way of showing-off a bit.

It would be unfair, however, to claim that Palindromes is just a challenging film that is uncomfortable to watch in both style and substance. For there is also an enjoyable strand of very dry humour that runs throughout the length of the film, even though some might find it a little sharp for their tastes (example: Mama Sunshine tearfully recounts to Aviva how one of her previous disabled charges ‘tried to run away to India. And she didn’t even have any legs!’)

Yet, in the same way that the structure of Palindromes is in itself a palindrome, so is a review of it. Because no matter how interesting the issues it deals with and the way it handles them, you can’t help but end up again warning people that if they are going to see this Solondz film, they’ll need to leave any delicate sensibilities at the pic ‘n mix.

In the end, there is little in Palindromes to enjoy, and much that will piss off a wide variety of people with a number of opposing views.

Although, of course, that could always be a good thing…