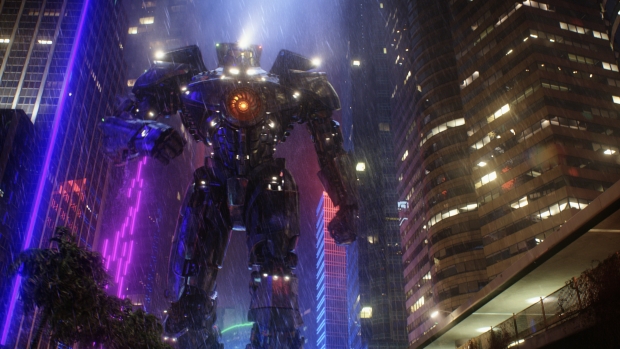 Summary: The battles are epic, as you would expect, but there's little to lend emotional weight to the story when you can't really grasp the meaning of it all.

Guillermo del Toro proved himself master of the imagination with the fantasy drama of Pan’s Labyrinth and the comic book adaptations of Hellboy providing grown-up with more fun than the average effects-filled CGI-led adventure. So it’s with some surprise that Pacific Rim turns out to be more Transformers meets G.I. Joe as Del Toro gets caught up with what was most likely a teenage dream to film giant monsters fighting huge robots at sea and amid cityscapes. The result is a boy playing with his toys without much thought for those watching – especially with such daft ideas and a shallow screenplay.

Pacific Rim is a blockbuster, make no mistake about it. The near $200 million budget, vast sequences of metal hitting monster flesh in epic battles and a storyline involving the fate of the Earth hanging in the balance ensure that. However, it becomes hard to shake the feeling that this is just a best-dressed b-movie when anyone tries to make sense of what is going on.

The pitch is this: monstrous creatures, known as Kaiju, keep appearing from the sea through a gateway in the Pacific – the rim of the title. Initially these Godzilla-like creatures were fought with traditional armed forces, but soon the Kaiju appearing through the portal became so powerful that a new weapon was needed leading to the creation of massive robots called Jaegers. These used a huge amount of resources and require two pilots to control them via a brain drift – a never-explained melding of the pilots’ minds so they work in tandem. We join the action as Kaiju ‘event’s are increasing in frequency and more than one start appearing at once.

Trying to make some sense of all this hokum is Charlie Hunnam’s Jaeger pilot Raleigh Becket who somehow managed to control one of the machines without a co-pilot. He is convinced to fight the Kaiju again by Stacker Pentecost (Idris Elba), the man in charge of orchestrating the attacks on the monsters. He looks after a team of Jaeger pilots with their machines, including potential rookie pilot Mako Mori (Rinko Kikuchi). There’s a lot of huffing and puffing with a couple of scientists about the situation facing mankind and where the Kaiju came from, but it’s all academic to providing Raleigh with reasons to face-off against the menaces to the human race.

The battles are epic, as you would expect. Those at sea are like wrestling matches while those among skyscrapers are far more inventive than anything Michael Bay managed with this trilogy of Transformers movies. However, despite the glossy looks, the characters are bland and sport unfathomable accents to match. Pacific Rim seems geared towards instant visual gratification, yet del Toro heaps in some dubious science when explaining the control of the Jaegers and appearance of the Kaiju that there’s little to lend emotional weight to the story when you can’t really grasp the meaning of it all. The result is while Pacific Rim is fine for a mindless robot romp, you might be expecting more from Del Toro in which case try to concentrate on enjoying the pricey special effects over the bargain basement script.