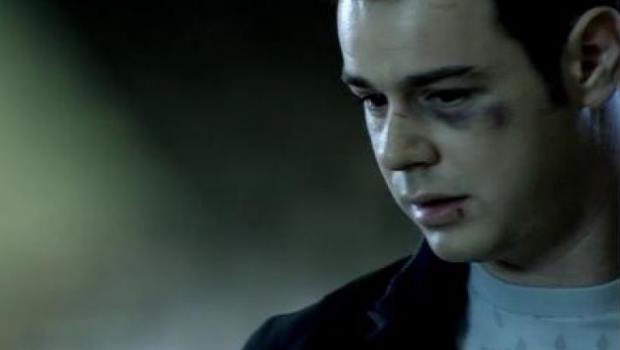 Summary: Outlaw is devoid of a social conscience and blissfully fails to provide a sensible answer to organised crime or street yobs.

Nick Love is in danger of imploding like Guy Ritchie if he churns out another gangland movie like Outlaw. The writer/director of The Football Factory and The Business has been carving out a reputation as the leading purveyor of gritty British violence since Ritchie went off the boil. After tackling the problem of football yobs in the former and paralleling 1980s Thatcherite Britain with organised crime in Costa Del Sol for the latter, Outlaw is another take on English tribal rituals. This time a group of men fed up with being pushed around by youths and criminals seemingly ignored by the police, become vigilantes seeking justice against those who have made their lives a misery. An interesting premise, however Love gets lost in male posturing, irritating “arty” camerawork and a basic abandonment of social responsibility that could be as damaging to his career as Ritchie’s awful Revolver.

The collection of bruised and battered men are Gene Dekker (Danny Dyer), living in fear of a workplace bully and threatening youths, barrister Cedric Munroe (Lennie James), whose wife and unborn child are killed by the henchmen of a crimelord he is prosecuting, and Sandy (Rupert Friend) who was disfigured in an unprovoked attack. Enter ex-soldier Bryant (Sean Bean) and security guard Simon Hillier (Sean Harris) to mould their quivering reluctance to strike back into a gung-ho attitude towards street fighting.

Outlaw starts out as a thought-provoking examination of the fear many people live in having been the victims of violent crime and let down by the police. Dekker, Munroe and Sandy’s lives are ruined by the events we often ignore on the news as “just another gang attack”. This realism is sadly lost as attention is turned towards a mindless set of brutish scenes as they strike back. Bryant’s training to harden them up includes starting a brawl outside a pub before taking on their individual enemies: think Falling Down meets Dead Man’s Shoes as they progress from fist fighting to armed assaults, but not justified in a logical way.

The fact Bryant’s call to arms features the phrase “c***s like Blair”, suggests Love is trying to make some bold political statement. However, this is hardly the most convincing way to present an argument against the current government. He may have wanted to be politically provocative, but his film resembles the sort of extremist rant you get from a local high street campaigner – and a drunken one at that. His nausea-inducing shaky camera style, presumably used to provide arty realism, is downright annoying. Concluding with a message that effectively says we should all buy guns to take the law into our own hands, Outlaw is devoid of a social conscience and blissfully fails to provide a sensible answer to organised crime or street yobs. An embarrassment for all involved.