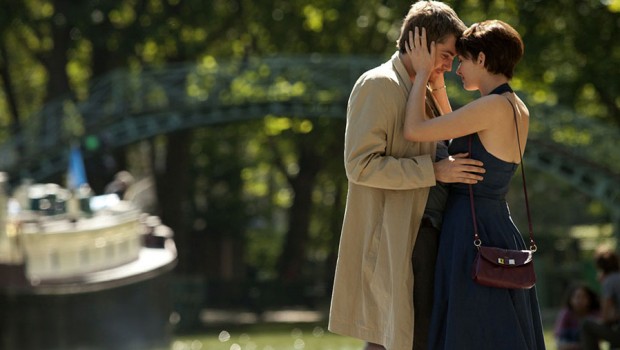 Summary: I wish the filmmakers had had the courage to bin the format and open the story out. A disappointment.

The concept’s as high as an elephant’s eye; Emma (Hathaway) and Dexter (Sturgess) meet at university, and almost sleep together after graduation on July 15th 1988. Somehow, despite their abortive one night stand, they become friends, and we catch up with them every year on July 15, filling in the gaps and waiting to see when, and how, they will finally get together. This worked brilliantly in the source novel by David Nicholls, where Em and Dex’ interior monologues help to make sense of their sometimes otherwise inexplicable choices. Sadly, despite the fact that Nicholls wrote the screenplay, the film suffers from all the usual problems of literary adaptation, exacerbated by the limits set on it by the very device that makes the novel so immediate and successful.

Emma is bright, sarcastic, witty and left wing; after leaving Edinburgh she moves to London where she expects to set the world on fire, but finds herself working in a terrible Mexican restaurant instead. Middle class Dex goes travelling before working as an English teacher, primarily so he can shag his students. Returning to London he somehow gets a job as a presenter of a late night yoof show, and becomes a bit of an early nineties cliché, taking loads of drugs and neglecting the people that really matter to him. After one too many lousy meals at a restaurant that looks like a cross between Titanic and the Atlantic Bar and Grill, Emma dumps Dex. (By now she is in a less than satisfactory relationship with Ian (Spall), a lousy stand-up comedian apparently modelled on David Walliams’ character Lou from Little Britain.)

The next time they meet, Emma is single and, having trained to be a teacher, has also started writing children’s fiction. Dex’s television career has stalled, his star having waned as quickly as it waxed, but he is happily in love with Sylvie (Garai, wasted), who is pregnant with his child. And so once again Em and Dex are out of kilter. Will they ever get together?

I had my doubts about One Day when I heard they were casting Anne Hathaway as Yorkshire lass Emma, and her accent is, frankly, all over the place, as if every now and then director Lone Scherfig remembers and shouts over ‘accent!’. Clearly she was cast with an eye on the box office; they needed a name and Emma is the more attractive character of the pair. Dex is trickier, spoiled and selfish, yet Sturgess manages to get across all his charisma while not hiding the fact that a lot of the time he is, frankly, a bit of a pig. And of course poor Dex gets thoroughly beaten down by life, and particularly by the icy Sylvie (a woman who refuses to smile?), as only then can he deserve Emma.

But it all feels so shallow, like a stone skimming across the surface of these lives that sprung from the page so richly developed that even when they were being utterly horrible you still felt that you knew them. Here its rushed; even if the story is interesting in 1995, we have to race on to 1996 because we only have two hours and twenty years to get through. I wish the filmmakers had had the courage to bin the format and open the story out. A disappointment.