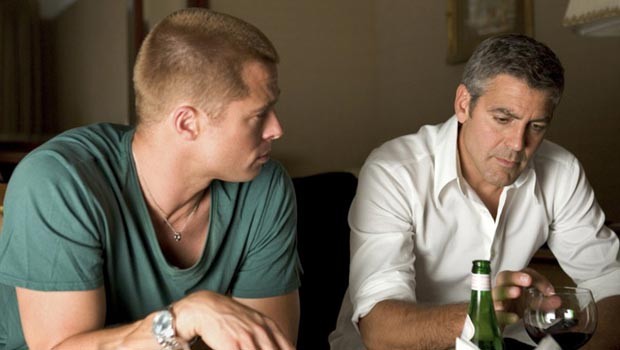 Summary: Well made and fun to watch, just don’t expect it to put you on the edge of your seat.

Picking up three years after where Ocean’s Eleven left off, we find Danny Ocean(George Clooney) and his previously-estranged wife Tess (Julia Roberts), settling into their new life together as Mr & Mrs Diaz. The gang have all gone their separate ways and are busy spending their ‘hard earned’ cash- some more successfully than others!

Unfortunately, Terry Benedict (Andy Garcia) is a man not in a hurry to forgive and forget and he tracks down every member of Ocean’s crew, informing them that he wants his money back, with interest, and they have two weeks to get it! ‘It can’t be done’ I hear you cry! Well fear not, because Ocean’s Twelve are the best thieves in the world!

Though apparently, they’re not. Some guy called ‘Midnight Fox’ is and he’s out to prove he is better than them by scuppering their every attempt to steal priceless artefacts in order to pay back Benedict.

Meanwhile, Rusty Ryan’s (Brad Pitt) ex-girlfriend Isabel (Catherine Zeta-Jones) is back on the scene; the crime scene at least. She is a detective working for Europol and is determined to bring Ocean’s boys down.

To say any more about the plot would not only give the game away, and it would probably give me a headache as it is so all over the place! And that’s the problem with this film. Director Stephen Soderbergh has abandoned the tight plotline and slick camerawork of his first outing with Ocean in favour of something far less satisfying.

At one point, I thought my contact lens had fallen out as I couldn’t focus properly, but then I realised this was actually the desired effect. Soderbergh may well have been trying to communicate Rusty’s sense of disorientation, being in a foreign city with his detective ex-girlfriend hot on his heels, but if this is the case it has been executed very clumsily.

The chemistry between the high-caliber cast is just as reactive as in Ocean’s Eleven and there are some great moments of banter, but the characters aren’t really given the opportunity to shine as they did first time around. The exception to the rule is Julia Roberts who gets a much meatier role and a very funny scene with Bruce Willis in cameo!

Despite some great set pieces (and Eliot Gould’s great costumes) there is just too much happening, as if Soderbergh didn’t know what to focus on and threw it all in! The obligatory twist in the tale ties everything up a little too neatly and the film meanders towards its conclusion with no real sense of urgency or danger.

Ultimately I think the film is trying to be too clever and loses sight of its primary function; it’s a heist movie and there is no big heist!

Ocean’s Twelve is well made and fun to watch, just don’t expect it to put you on the edge of your seat.