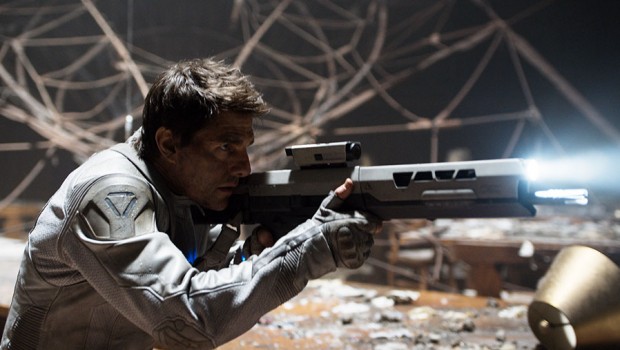 Summary: This has enough drama and conjecture to keep you guessing.

This seems to be the first of many studio tent-pole disaster movies heading our way this summer, with the likes of Will Smith’s After Earth, Brad Pitt’s World War Z, Christopher Nolan’s Man of Steel as well as the impending mega-sequels to Star Trek, Thor and Iron Man. But this, may I say, has a certain Dystopian panache to it…

Cruise plays Jack Harper, a Technician or glorified care-taker on post-Apocolyptic earth. The year is 2077 and what remains of our planet is essentially heat and dust. According to fable, aliens attacked sixty years prior, and the ensuing nuclear war razed Earth to the ground and part-destroyed the moon. The resulting tectonic upheaval threw Earth of balance, meaning it can no longer sustain any form of life. Harper repairs drones that hunt down and attack alien ‘scavs’ or scavengers, as well as protecting the resource extraction machines, literally sucking up water from the oceans as a means of renewable energy, to sustain new life elsewhere… In his own words: “We’re the Mop-up Crew!”

His partner in this endeavour, and somewhat icy paramour – Victoria (Riseborough) is very much a ‘by the numbers’ lady, sticking to protocol and impatient to complete their final duties on earth in their final two weeks. She was assigned to him, post a mandatory memory-wipe five years earlier, and coordinates his daily renaissance and repair missions with their HQ in the sky. They’re working towards a deadline so they can join the rest of their kind at the ‘Tet’ – a tetrahedral space station that the final human survivors have migrated to, en route to a habitable colony on Titan, the largest moon on Saturn. This all seems somewhat straightforward, but for Jack’s constant flashbacks of meeting a woman (Kurylenko) on top of the Empire State Building.

Now I’m sure most men (and some women) have had dreams of Bond girls in their time, but these recurring thoughts have more resonance than he can figure out. Close to the end of their mission, a spaceship crash-lands on earth in a designated ‘prohibited’ zone. Jack goes to investigate anyway, and on finding the craft – Odyssey, also finds Julia (Kurylenko) the woman in his dreams, asleep inside it.

I’m not gonna beat around the bush, I absolutely loved this movie; it’s a whole heap of fun. Granted it’s science fiction, and one of the lesser known comics to have made it to the silver screen, but there are enough twists, turns, jumps and revelations to sustain its two hour running time. The Director Kosinski (Tron: Legacy) also authored the comic, so who better to introduce us to his world, the hues, multi-dimensional vistas, and finite intricacies of the characters. Above all there’s a humanness about the movie, and wider questions on corporate culture, sustainability and how we manage our eco-systems.

Jacks idyllic secret lake getaway, re-living the classic Superbowl touchdown, listening to classic LP’s on his phonograph… all resonate the simple pleasures in life, the things we take for granted, and those that we live for. When it’s all about to end, what really matters to you?

This has fabulous performances from all the cast, with Riseborough and Leo both on-point and scarily cold, and Cruise and Freeman as dependable as ever. It’s a massive canvas, we’re looking into the future, at days gone by, and new worlds too. This has enough drama and conjencture to keep you guessing, with your double takes trying to pre-empt wtf is going on, as it hurtles toward its epic conclusion.