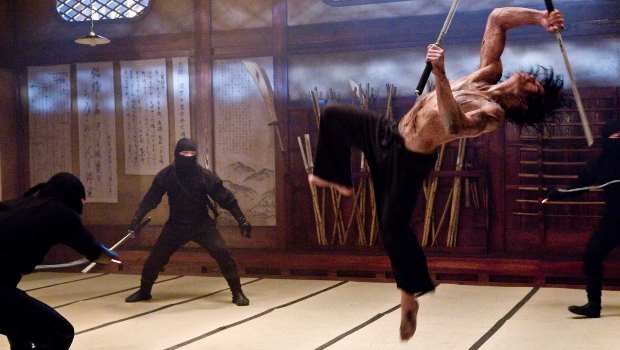 Summary: Ninja Assassin can’t be taken seriously, but with so much blood flying through the air from start to finish, it fits the criteria of acting as a Friday night popcorn flick for fight fans.

The last time the Wachowski Brothers teamed up with director James McTeigue they produced V for Vendetta, up there with Watchmen as a rare, successful adaptation of an Alan Moore graphic novel. It’s knife-wielding freedom fighter living in the shadows of a dystopian, totalitarian England had fluid actions scenes with brains to match. Here, they reunite following the Wachowski Brothers’ directorial flop Speed Racer which featured Ninja Assassin’s star, the Korean singer Rain, in a series of fight scenes. These were enough to convince the Wachowski Brothers they should dedicate an action film to the rising star and this is the result: a blood-spurting, all-action thriller that has a lot of spirited fight scenes lacking any pause for the characters to become anything more than one-dimensional clones from films we’ve seen countless copies of before.

Rain plays Raizo, raised by the Ozunu ninja clan to become a lethal assassin. He’s trained in an art of self-healing so he’s nigh-on impossible to kill and soon gets sent on missions. When he develops a feelings for fellow clan member Kiriko (Kylie Goldstein), he is drawn into doubt about the Ozunu’s methods and goals. Though he refuses to leave the clan the night Kiriko decides to escape, he later regrets his decision when she is captured and executed by her elder brother Takeshi (Yune). This sets in motion a resentment which will eventually see him turn on his clan and become hunted by his one-time allies and the local authorities.

McTeigue proved he can direct an impressive feature with V for Vendetta and the fight scenes are the major draw for Ninja Assassin. Every time Raizo launches into action with his spike on a metal chain blood gushes from his victims and limbs go flying. He employs a few nice effects such as zooming in on key moments in one battle and uses the videogame approach of flooding the scene with enemies for Raizo to despatch with ever-increasingly elaborate panache. Though the action is far less graceful that Crouching Tiger and Rain’s lack of martial arts training prior to working on this film means he’s no Jet Li, it’s enjoyable enough and given action makes up 70 percent of Ninja Assassin, makes for easy viewing. Detracting from all this, though, is scenes of dialogue which are delivered so painfully poorly that you wonder if they were directed by an intern who just happened to be on the set rather than McTeigue.

Allegedly, Matthew Sand’s original script for Ninja Assassin was rejected by the Wachowski Brothers just six weeks before filming so they hired J. Michael Straczynski for a redraft he produced in 53 hours. It shows. Rain has very little to say, perhaps given his limited acting skills, and is even the subject of an in-joke when it is remarked he looks like he should be in a boy band – sure to raise a groan. The majority of talk is ninja honour nonsense from Raizo’s master who speaks in soundbytes from other movies while Naomie Harris and Ben Miles play the most unconvincing law enforcers ever as they exchange dull ideas on their way to finding Raizo’s true identity. You end up just longing for a fight scene rather than listen to any more of their dull chat which adds nothing to their one-dimensional characters: it’s disappointing to find such a talented crew give their cast so little to work with. As a result, Ninja Assassin can’t be taken seriously, but with so much blood flying through the air from start to finish, it fits the criteria of acting as a Friday night popcorn flick for fight fans.