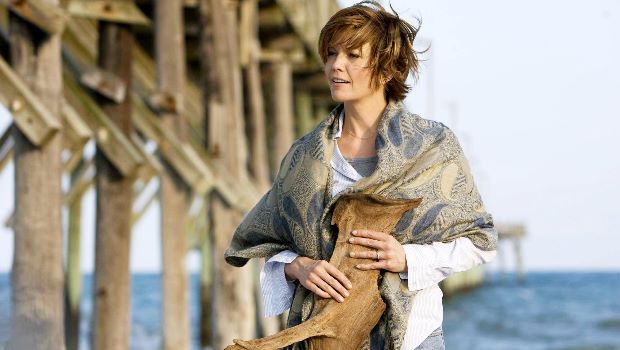 Summary: Nights In Rodanthe is just dire; lightweight melodrama with awful clichéd drivel instead of a script,

Hollywood ignores people over thirty so thoroughly that a film like Nights In Rodanthe is a real event; aimed squarely at the over-forties, it ought to be what was once called a woman’s picture, and should star Bette Davis or Joan Crawford, massive of shoulder pads, chain smoking and exchanging witty lines with their co-stars even as their hearts – and ours – were breaking. Sadly this soggy soufflé of a movie brings to mind nothing more than cheese – it is a complete Marmite experience which you will either love or loathe.

Nights In Rodanthe reunites Diane Lane and Richard Gere, last seen together in Unfaithful, where at least Olivier Martinez brought some youthful energy to proceedings. Lane plays Adrienne, separated from her philandering husband (Meloni) and struggling to bring up her two children, who agrees to help out her friend Jean (Davis) by looking after her inn in Rodanthe (a real, if remote, place on the Outer Banks of North Carolina) for a long weekend. The only guest is Paul (Gere) a surgeon from the city who seems simultaneously to want to get away from everything and not be alone. And they say women are contrary…

A big storm is coming. We know this because the weather forecast is played repeatedly and, when Adrienne goes to the supermarket to stock up on sliced white bread, a old fisherman says so. Nonetheless, instead of decamping to the nearest mainland place of safety, Adrienne and Paul decide to stay on the island, despite the fact that the inn is not merely on the beach, but juts out into the sea like a sort of pier with a house on top and is clearly incredibly dangerous. Then they get drunk, throw things, exchange confidences, and gradually become closer until the night of the storm itself where, after some oddly horror like sequences, they naturally end up in bed.

Despite the rumours that this was going to be a big one, when they wake up the next day, the sun is shining and the sky is clear. Adrienne gives Paul a piece of her mind about the reason for his being in Rodanthe, and he faces his demons before moving to Ecuador to be reconciled with his son.

Diane Lane is a wonderful actress, with a luminously beautiful face, who seems to be brave enough to grow old gracefully, and she is excellent in this, but the material and the direction are both so dreadful that you just wish she had better material (or a different agent). This is the kind of film in which a character remark, apropos of nothing, that one day another character will see the wild horses, and you just know that before the two hours are up that they will. Nights In Rodanthe is just dire; lightweight melodrama with awful clichéd drivel instead of a script, and that’s a real shame as it is still so rare to get leading romantic roles for actors over 35.

Speaking of which, what on earth were the studio thinking of when they approved that poster? I don’t know who that bloke is holding Diane Lane’s face, but it certainly doesn’t look like the silver fox Gere. Frankly it could be almost anyone. Roquefort, anyone?