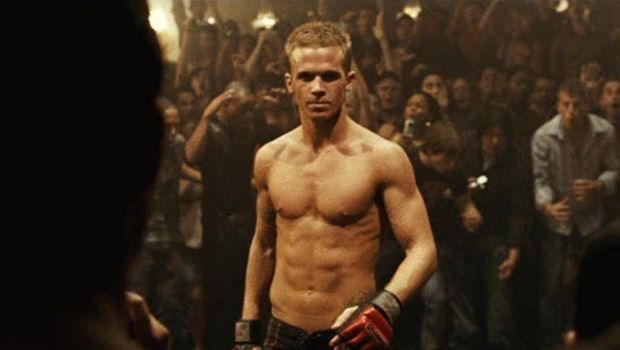 Never Back Down Review

Summary: Never Back Down is exactly what you’d expect. It’s like fast food, and will undoubtedly be just as popular.

Never Back Down is The Karate Kid for the 21st Century, with better fight scenes and mobile phones. Aimed squarely at 16-year-old boys, who will love it, it’s a product placement dream.

Jake (Faris) has issues. Since his father’s death in a car accident, Jake has struggled to deal with his anger; constantly getting into fights, he has driven his mother (Hope) to distraction; she hopes that the move to Orlando, Florida, where Jake’s little brother Charlie (Smith) has won a tennis scholarship, will change their lives. Used to being a star athlete at home in Iowa, Jake’s status as the new kid in this playground of the rich is uncertain; he’s immediately marked out as an outsider in his flannel shirts. But his troubled past quickly emerges when a clip of one of his more spectacular fights surfaces on the internet and is r seem to be looking up when Jake meets Baja (Heard) in English class. She is blonde, pretty, and less vacuous than you might expect. So when she invites Jake to a party he is pleased to accept. But at the party he is dragged unwillingly into a fight with Ryan (Gigandet), Baja’s boyfriend, and is hurt and humiliated. Jake withdraws even further, wary of everyone.

But life – in the form of Max (Peters) – won’t leave Jake alone. Max has seen Jake’s right hook, and convinces and cajoles him to come down to his mixed martial arts club, run by coach Jean Roqua (Hounsou). Roqua is a legend in the world of MMA – a sport that mixes fighting styles from a number of disciplines including karate, judo, kickboxing, wrestling – and, after initial doubts, agrees to take Jake on as a student, on one condition; that there is no fighting outside the gym. Jake readily agrees, and loses himself in the training, coming on in leaps and bounds. At last he has an outlet for his aggression, and begins to temper and control it.

Baja realises that Ryan set them both up, and dumps him after attempting to apologise to Jake. After some further miscommunication, Jake forgives her, and the two begin a relationship; Jake also makes the first moves towards peace with his mother who, after initially reacting with horror to the idea that he is learning to fight, begins to understand how it’s actually helping him. But Ryan wants revenge; when he realises that Jake isn’t interested in settling old scores, he provokes him in the cruellest way, and Jake realises that he has to fight for his own safety and that of the people he loves…

Don’t go to see Never Back Down hoping for any kind of acting masterclass. Or finely honed dialogue. However, if you fancy some fairly savage fighting and a slightly soppy movie of the week style family drama, then you’ll have a grand time. The film only really comes alive in the fight scenes which are vicious, exciting, and brilliant choreographed. Both Cam Gigandet and Sean Faris have physiques that would give Brad Pitt in his fight club days a run for his money, and the smackdowns are enjoyably brutal, though I could have done without the silly effect where we suddenly see an x-ray of Jake as Ryan’s feet and fists slam into his ribs.

And the rest? So predictable, but sometimes that’s not a bad thing. The script is shocking – at one point Jake actually has to deliver the line ‘I don’t want to be angry any more’ with a straight face. All the elements are there; angry outsider, popular blonde girl hiding her light under a bushel, mean boy, wise mentor with his own problems, blah blah blah. The only novel element is the use of the internet and mobile phones to disseminate information; gossip flies round, like it always has, but now it’s electronic and features images; Max’s immediate response to any kind of action is to whip out his video camera and start recording it for posterity. But other than that, Never Back Down is exactly what you’d expect. It’s like fast food, and will undoubtedly be just as popular.