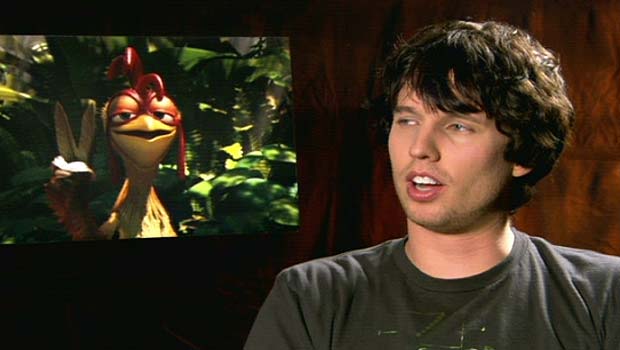 Napoleon Dynamite catapulted Jon Heder to movie stardom, but it’s his role as a surfing chicken in the animated film Surf’s Up that he wants to chat about today…

Hey Jon. You play a surfing chicken in Surf’s Up. How do you get into character for a role like this?

It’s hard and it’s weird because you think, ‘OK, I’m a surfing chicken.’ You just try to play it like yourself because that’s what is fun – when you see the personalities in animations match up with a really weird-looking character.

How did it feel to be a chicken when everyone else gets to be a penguin?

It felt great because I get to stand out. It was cool to be the ugly duckling.

Have you ever been on a surf board?

I’ve been on one, but I didn’t stand up. It’s hard. I get good at anything I try, but surfing is something else. I’m going to try it some time – I have a lot of friends who do it, but it doesn’t really match me.

Oh sure. I trained to be a lifeguard once, but I never got a job. I did the first step of getting my certificate but then I was too lazy to go out and look for a job. Saving people’s lives? I’ve done my fair share of first aid.

So when was the last time you wiped out in life?

The last time was probably on the ice when I was training for a role on Blades Of Glory. It wasn’t even a cool wipeout – I wish it was cooler. I was spinning, I fell and I broke my ankle. We had to make some changes to the movie and split it in half. But it’s doing great now. I can crack the cartilage, so that’s healthy.

Had you ever broken a bone before?

Yep. I broke my other foot on the other animation I did – an animated film called Monster House. How did I do it? I tripped on a cable. Kinda crazy that I broke a bone on an animation, eh? It wasn’t a typical animation though – we were running around the place whilst saying our lines. It was pretty crazy, but I guess I’m just a bit of a klutz.