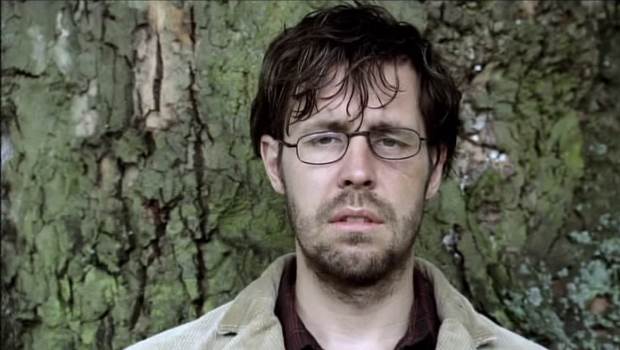 Summary: Mischievous and quirky, laced with a streak of wickedness that provides a fine first foray into somewhat virgin territory for Morris.

One man and his dog this isn’t! My Wrongs 8245-8249 and 117 is the latest hilariously twisted comedic outburst from Chris Morris, the programme making menace who terrorises television executives with his uniquely fearful brand of satirical comedy. This curiously titled, ten minute short film, released directly onto DVD after knocking around a number of recent film festivals and scooping a BAFTA award, marks the joint-filmmaking debuts’ of Morris as director and Warp Film Productions, the new short film division of Warp records. In addition to the film itself the DVD includes “A runners commentary” and two audiovisual remixes of the material.

Once heralded as “The most loathed man on TV”, Chris Morris emerged in the mid-nineties as the host and co-writer of the seminal “Day Today” series, which completely de-constructed the serious news and current affairs format with a lethal injection of the surreal. Morris then went further with “Brass-Eye”, essentially a one-man plan for comedic revolution. “Brass-Eye” went way off the chart in its satirical originality and outright attack on the standardised norms of taste and decency. Morris took absolutely no prisoners in his assault on the machinations of the popular media. MP’s, celebrities and the public at large were all ensnared in a turkey shoot of subversive gems, Morris even went so far as to flash up a subliminal message during one of the shows which read: “Michael Grade is a cunt”. Grade was, of course, the head of Channel Four at the time (guess which channel “Brass Eye” aired on?) and promptly pulled the plug on Morris’ shenanigans. In the process, Morris had established that no subject was too taboo to tackle and so in 2001 “Brass Eye” returned to the channel (after Grade had left!) with an episode devoted solely to the volatile topic of Paedophilia. Naturally, Morris carried around a glowing corona of controversy after his brief re-appearance on the small screen before turning his attention to directing his first semi-cinematic release. So what can we expect from a man who will do anything for a laugh when he liberates himself in film?

My Wrongs… opens in a London town house occupied by a man (played by Paddy Considine) and a dog. Does it seem too normal already? Well, don’t worry because it doesn’t take long for the mayhem to start. The Man (that’s all the information we need it seems) is ordered to take the dog, Rothko (does he get top billing for actually having a name I wonder?) walkies by his absent girlfriend, via an answer phone message.

Rothko promptly announces that he can talk (he is voiced by who else but Morris himself) and leads the man into a series of avoidable disasters, involving an angry bus conductor, some malicious mallards and a Christening gone badly awry. Rothko quickly declares himself a lawyer, and is at once the catalyst for disaster and the reassuring voice of reason for the man, who is seemingly unfit to deal with the emotional strain of house sitting! Despite all of Rothkos’ legal manoeuvring the man is lead swiftly (with a leather collar around his neck?!?!) into danger and self-styled confusion.

My Wrongs… is fully loaded with characteristic Morris weirdness, that picks up where his most recent televisual work, notably the sketch show “Jam” left off. The content is much broader in scope offering a fully devised narrative that has at least one foot rooted in normality. We are delivered a much more sumptuous package than anything Morris has produced before; a semi-serious and dark, fictional endeavour contrasting heavily with Morris’ previous socio-political satire. The production is neat and tidy, with some impressive visual puns and flourishes (enhanced by the sort of quality digital effects that are seldom evident in the short film) dotted about the piece. The dream sequence interlude midway through is particularly imposing, and inexplicably strange. Fans’ of Morris’ previous work will find similarly enjoyable resonance’s throughout proceedings.

However, despite being intriguing and absorbing, My Wrongs… narrowly fails to retain the balance between severe edginess and humour that ignited much of Morris’ exuberant and pioneering televisual work. Furthermore, it lacks some of the bravery and ambition that quickly singled Chris Morris out as a leading light in contemporary British comedy. Morris’ is capable of milking hugely enjoyable comic moments out of even the most tender and volatile subjects, much of this characteristic daring is absent from My Wrongs…, it feels slightly timid, a tad under-charged and lacking some of the complexity we normally associate with the directors’ work. It is not unsettling enough to effectively draw us into the psychological fluctuations of the leading protagonist, and resultantly some of the finer comedic and dramatic elements are blunted. My Wrongs…, far from lacking in refinement, would benefit from a larger dose of the chaotic.

Nonetheless, My Wrongs… is mischievous and quirky, laced with a streak of wickedness that provides a fine first foray into somewhat virgin territory for Morris. My Wrongs… gives the feel of a filmmaker stretching his legs in a medium that is sufficiently new to him so as to provide both a challenge and a relative departure. This dabble with the cinema proper suggests that Morris has the skills necessary to add a new dimension to British filmmaking, outside of television, given more time and opportunities, but he simply needs to step more confidently into the role and carry some of the stylistic and thematic elements that made his earlier work so fresh and disarming with him. I predict that his next project will be outstanding. The components are all there, now the output just needs to be cranked up a notch or twelve.